Lucban at Nightfall : Life Before Pahiyas

Harvest festivals are  celebrated by different cultures all over the world primarily to give thanks to their gods for a fruitful harvest.  The Philippines being an agricultural country has its own share of  a colorful and grand harvest  feast , perhaps the most famous dates back to the 16th century and held annually  in Lucban, Quezon, known as Pahiyas Festival. It is a  testament to the Hispanic colonial influence on Filipino culture. 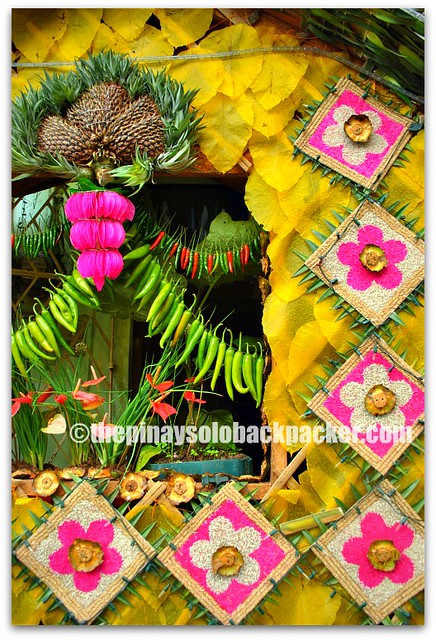 Pahiyas Festival is more of a religious celebration in honor of San Isidro Labrador (Isidore the Farmer), the Catholic patron saint of  peasants and day laborers.

Every 15th of May, houses  in the municipality are clothed with agricultural produce such as vegetables, fruits, rice grains, palm hats, flowers, ferns, paper mache and colorful rice wafers known as kiping.  It should be noted that this is only one of the many celebrations in the Philippines  for the patron saint, there’s one in Aklan, Nueva Ecija, Marinduque and Bulacan. 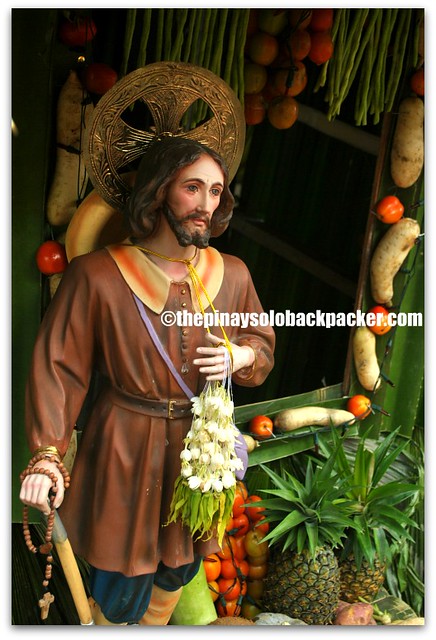 To evade traffic, I hopped in an ordinary bus bound to Lucena (special thanks to Ferdz Decena for the info on this route) on a Saturday afternoon, a day before the bountiful festival.  I texted a  fellow blogger Atty.Mhe-anne who will be couch surfing in a house of  a new found friend in Calaguas, Issa Collantes.  It was a  4 hour bus ride but the palm trees dancing against the pinkish sky provided a much needed warmth and fondness.  The atmosphere along the road makes me crave more to revisit the simple life in our province. 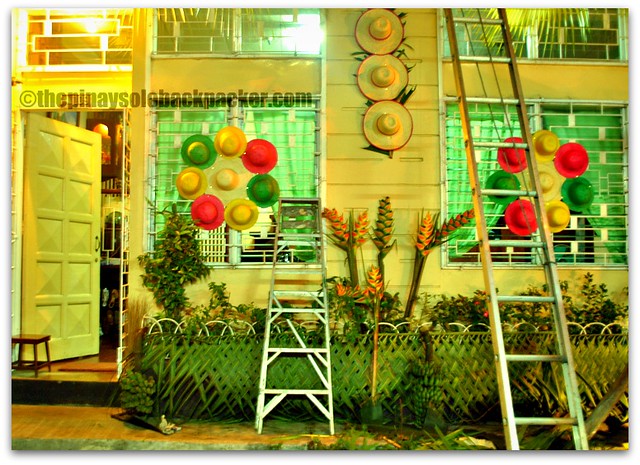 It was already dusk when I arrived in Lucena Grand Terminal, so I asked around for a jeepney going to Lucban (Php 30/ USD 70) .  Good thing I was able  to catch the  last trip but I was starving so I grab some siomai and ran back to the jeep before I get left behind.  It was an easy 45 minute ride, no traffic yet, I should say I was lucky! 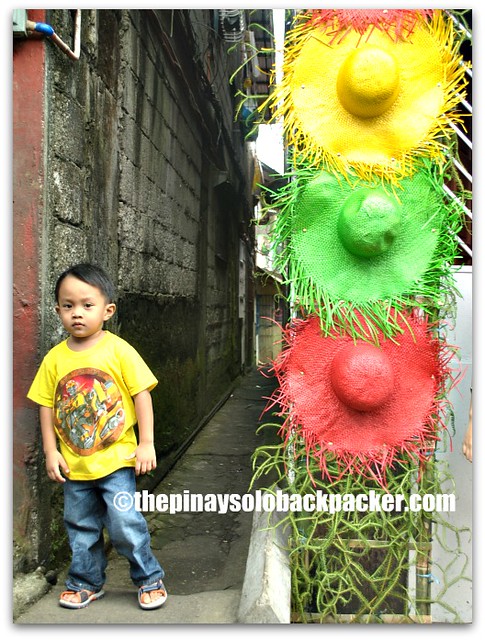 But  when I arrived in Lucban, my friend is still enjoying their long drive around the province of Laguna, so although I’m restless because I haven’t slept for 24 hours, I had to maximize my time.  Otherwise, I can secure a  bench to nap near the church.  Sleeping in public places is becoming a habit lately, though it is synonymous with adventure, I must admit I am starting to pity myself. 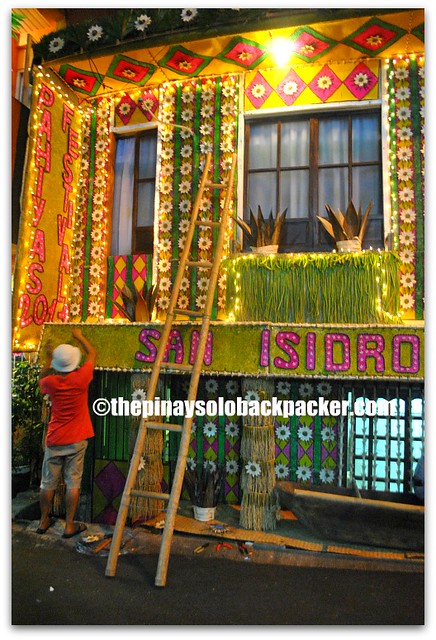 I was greeted by throngs of crowd of young people preparing for the feast the next days.   Hats made of native materials of all colors and styles adorn the sidewalk, that if it weren’t for the old colonial Spanish houses and the smell of  Lucban’s longganisa permeating my nostrils, I’d probably think I’m in Britain looking for a Royal hat that I could wear on my engagement with Prince Harry. 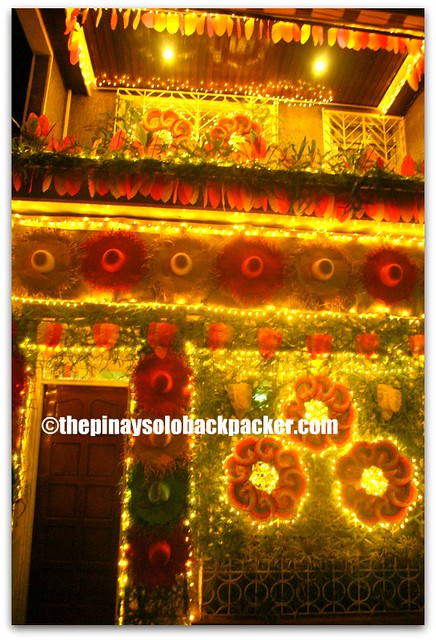 After eating dinner at a barbecue stand beside the main road, I followed the crowd going to the plaza.   The streets are adorned with trimmings for the upcoming feast.   This town reminds me of  Liliw, Laguna with the heritage houses, shops and all. I went inside almost every shop, checking the goods and the prices, pretty cheap and comparable to the prices in flea markets and tiangge in Manila.  I particularly like the  posh royal and summer hats (retail price starts at Php 50/USD 1.16) and the stylish flat shoes of all colors and designs (retail price starts at Php 100-Php230/USD2.32-5.33). 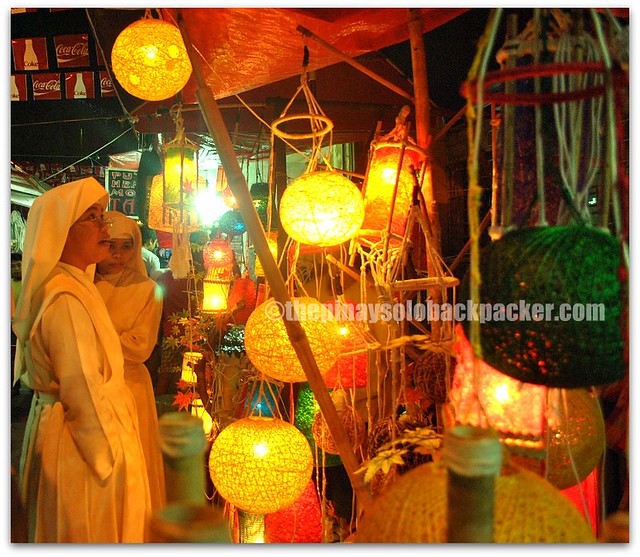 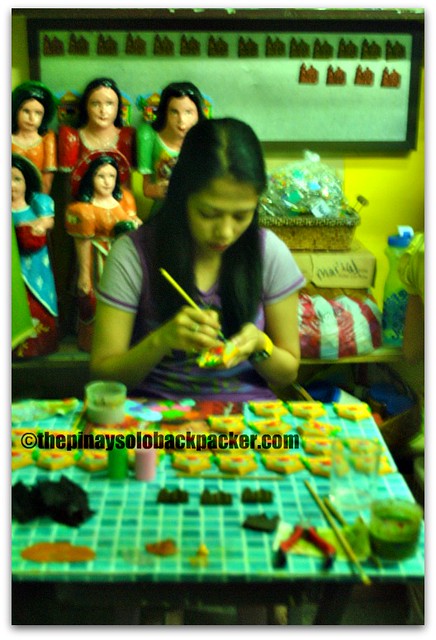 how to make ref magnets 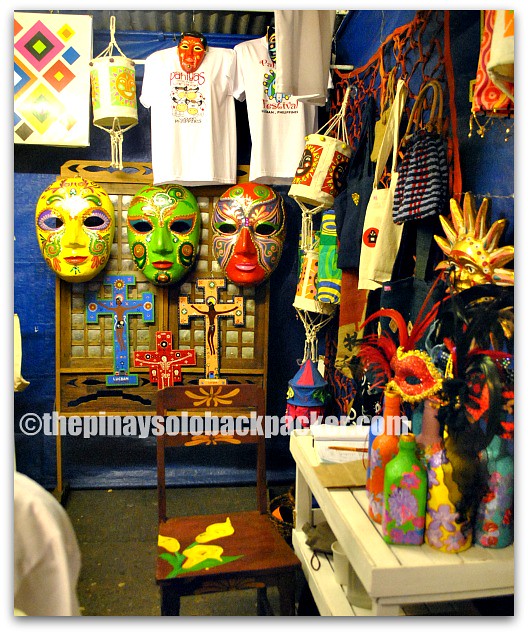 In the midst of the crowd I stumbled on an art shop selling products from all over Asia, bought a scarf from India for Php300 (USD 6.95), it looks like my Bohemian skirt from Nepal, with all those handwoven small mirrors in the quilted-like cloth. One of  the things I love doing whenever I travel is hunting for  bargain shops, flea markets , vintage and art shops with unique artsy stuff and memorabilia and it’s nice to accidentally find one in Lucban. 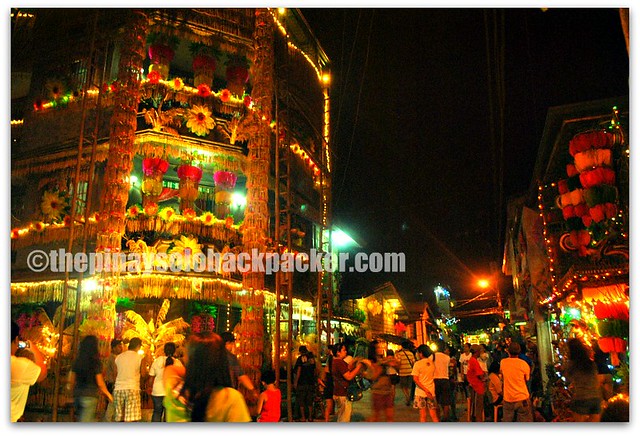 Lucban, a sleepy town,  transforms into a  crowded and lively tourist destination during the world-known Pahiyas Festival.  Strolling around the municipality before the  harvest  feast, gives one a glimpse into the lives of the local and the preparation for the grand celebration. 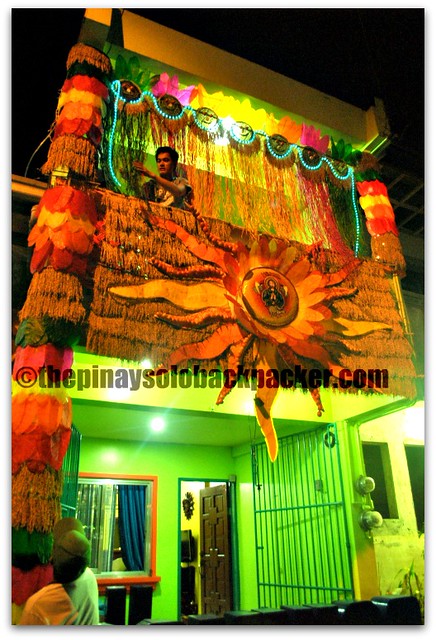 Like any other typical fiesta in the Philippine setting, men and women are seen busy preparing for the feast and entertaining their guests, mostly relatives and friends arriving from another province. 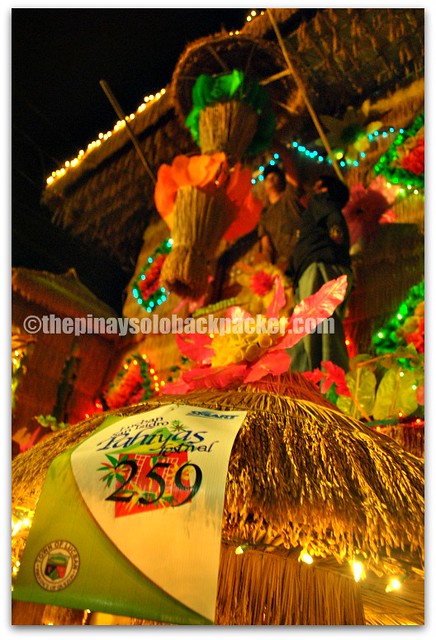 Upon roaming around the town center, I noticed that the men and children mostly takes care of the decorations of  houses while the women are busy cooking or entertaining their guests, and most teenagers  are either on a drinking session or at the plaza for the rock show. Whoever said there’s not much people prior to the festival is  dead wrong but yeah, “lesser” compared to the day of the event itself. 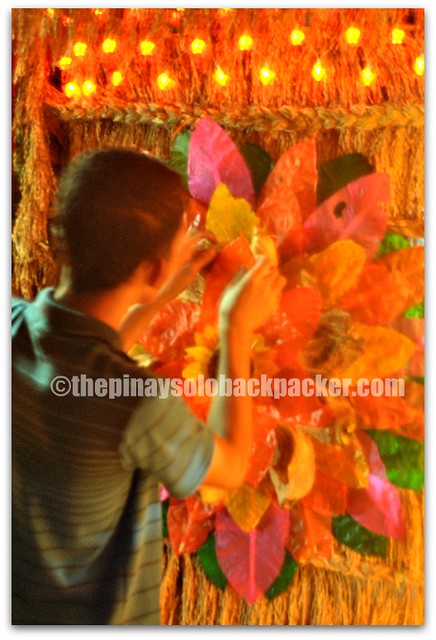 Legend has it that the municipality of  Lucban in Quezon province whose situated at the foot of  Mt. Banahaw derived it’s name from pomelo (Citrus maxima or Citrus grandis).   Surprisingly, the citrus  fruits is not the signature food or delicacy of  Lucban but it is Pansit Habhab, Longganisang Lucban and kiping. 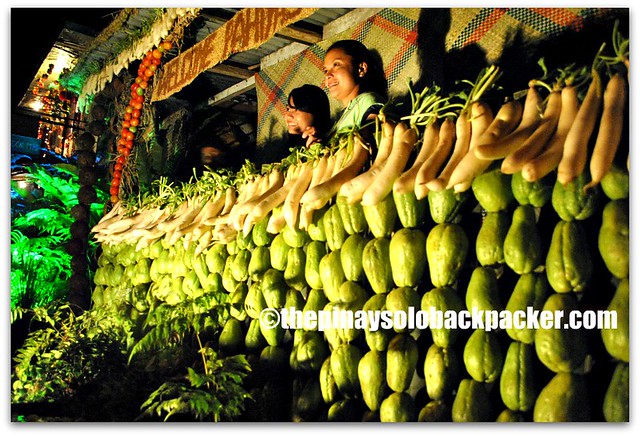 Pansit is the local term for noodles in Filipino cuisine and it has many variants.  Pansit habhab (also known as pansit Lucban) is a noodles mixed with vegetables and vinegar is added before serving. 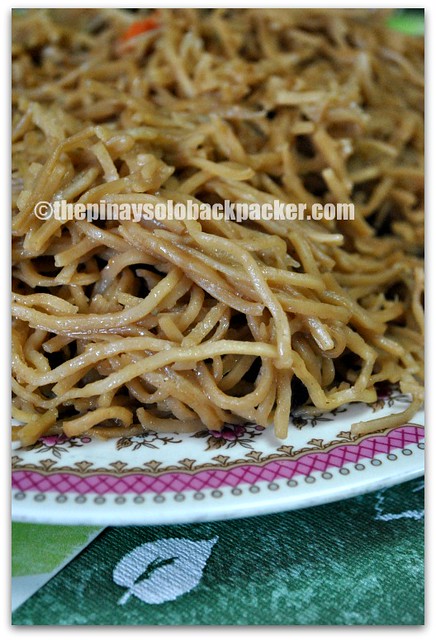 The name habhab is said to have originated from the way the pansit is eaten – without a fork and spoon (kamayan)  picking the food with your hand and directly  putting it to your mouth when eating. 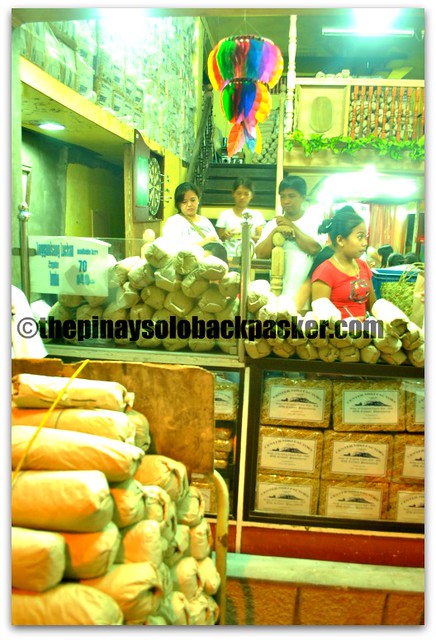 Pansit habhab are sold in packs at the stores in Lucban for Php 40 (USD 0.93)  and the cooked ones  were being offered at the sidewalks during the feast  for Php 10 (USD 0.23).   My tastebud favored Pansit Habhab than Longganisang Lucban. 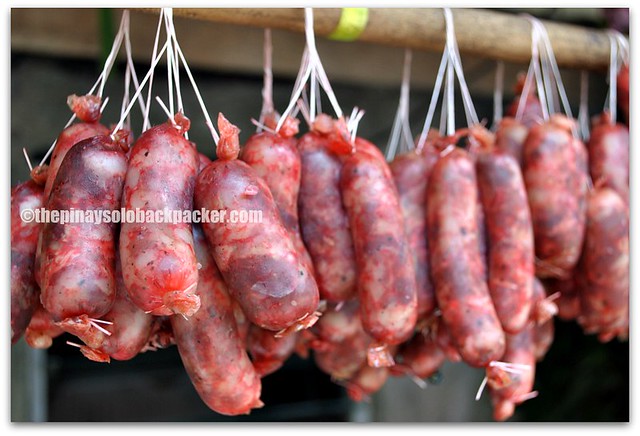 Longganisa is the Filipino term for sausage.  Unlike the typical sausages though, Longganisang Lucban is smaller with longer shelf-life  and is self-contained since you don’t need oil to cook it.  It is flat, sour and garlicky compared to the usual sweet and oily sausages we buy at the supermarket.  They’re seen hanging, tied in the bamboo poles during the feast  and retails at Php 70 up (USD 1.62 up).  At dusk, I chanced up some locals who are preparing the famous longganisa outside the streets. 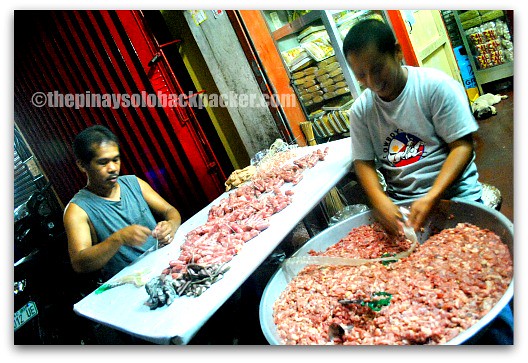 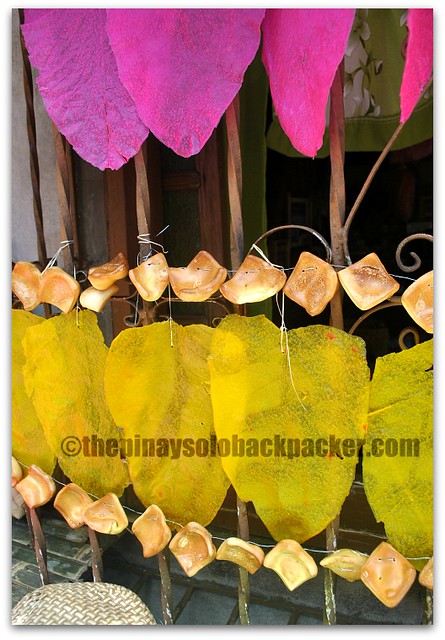 I didn’t know that you can actually eat kiping. All the while I thought they’re just colorful Japanese papers cut into the shape of  leaves.  Kiping is a leaf-shaped wafer made of rice paste.  Mature leaves are collected and laon rice is used to prevent cracking of the rice wafer. 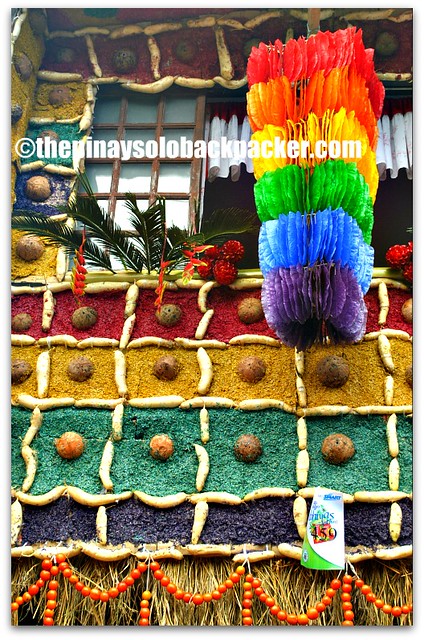 It was getting late and my friend is still roaming around somewhere, I went looking for the church and found a lighted hut with some weary tourists.  I secured a place to rest or sleep if ever my friend won’t find me.  But alas, when I am about to close my eyes, the loud voice of the tanod surprised me and awakened some people taking a nap! “Bawal matulog dito! (Sleeping is not allowed here!) “, he shouted and closed the lights.  Errr!  If there’s one thing I don’t like about my experience in Lucban is staying in that church garden.  I wish the church people could’ve opened there doors for weary tourists at least for that night.  I bet the poor San Isidro wouldn’t be happy about it.  I’ve seen a couple of  tourists rest and take a nap  in the church garden, but the guards kept shouting and displaying their old guns and sticks  like they rule the world.  I even entered the church and had my photo taken on the miniature church with all the lights and kipings and the lady manning the church kept asking me as if shoving me away. “Sino bang inaantay mu? ” , and then shouting to the other tourists, “sarado na jan wala ng daan!” 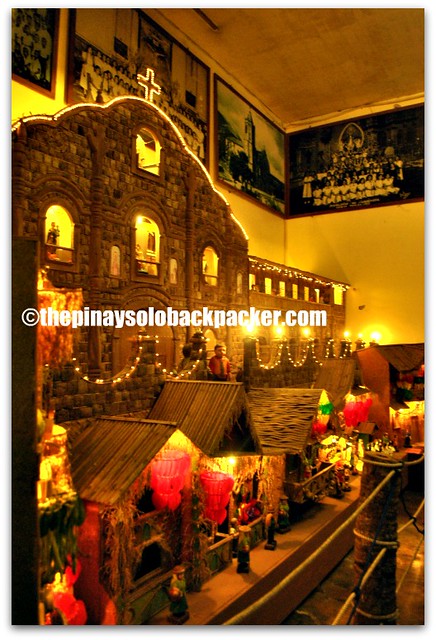 As soon as a truck loaded with chairs entered, I heard them talking in front of me, ” And dame pang tao, bahala sila, isarado naten na yan!”. How about those tourists who doesn’t have a place to stay, but we’re just too ecstatic to visit Lucban at dusk to evade traffic the next day?   I bet it wouldn’t hurt for the church people to open their gates at least for one night for these people, besides, this is a celebration for the saint of peasants and day laborers. 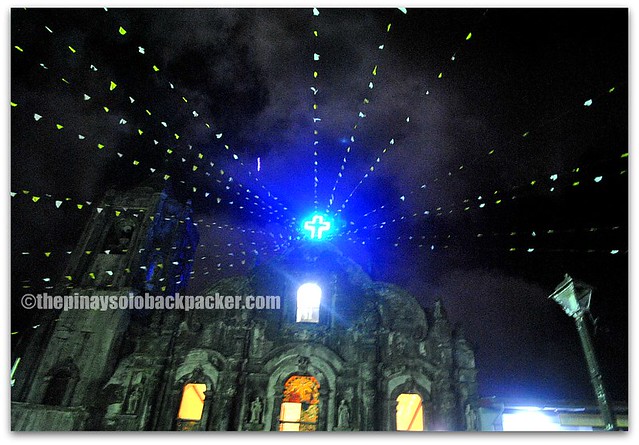 So the tourists walked out of the church park as the powerful church people closed the gate.  Good thing, my friend was already waiting for me outside the gate and introduced me to her friends who invited us to their house.   In celebrating a religious feast  in a town I barely know,  I expected the church people to welcome  poor people like me, but instead it’s the strangers who welcomed me warmly. 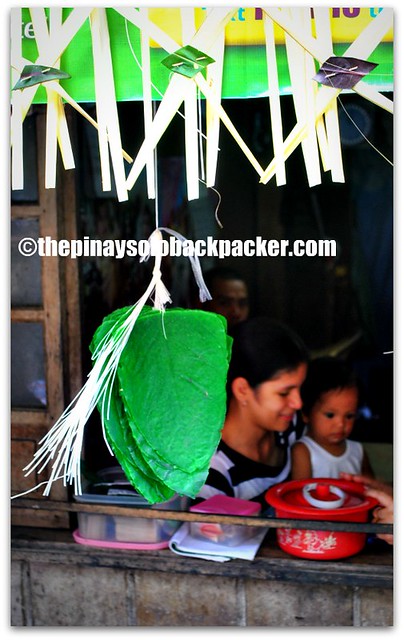 *Special thanks to: Issa Collantes and family for the accommodation and food, Atty. Mhe-anne Ojeda and friends, Zaide Uy, Sally Velasco, Bryan Colona and friends. 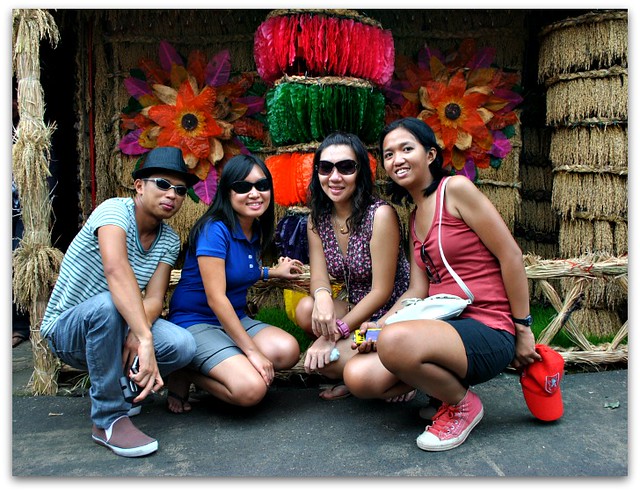