When you’ve lived in the Philippines all your life or have explored its beaches, I bet your standard of a “good beach” is hard to reach.  Arguably, the best beaches in the world and in Asia is found in the 7,107 islands of the Philippines.  Aside from old colonial structures, I choose Malaysia as  one of my summer backpacking destination primarily because I wanna discover its pristine beaches.  Sadly, Malaysia’s paradise islands are overshadowed by Thailand’s beaches. My original plan was to check out the posh Langkawi in the west, the backpacker island of  Pulau Perhentians and Tioman Island in the south, one of  Time’s choice as  Best  Beaches in the World.  Pulau Pangkor was never on my plan, though it’s reputed to be one of the best beaches in the west,  the modern Langkawi took all the glimmer perhaps because of  its massive tourism drive. 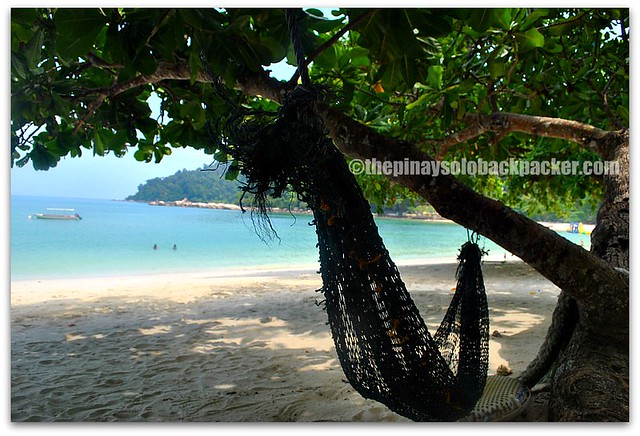 What I like about Pulau Pangkor, aside from it’s homey and casual atmosphere is you don’t need to rent a boat to get to the beach. It only takes one ferry ride from Lumut town for  a round trip ferry ticket  of RM10(3.31USD), so make sure you keep your ferry tickets plus another  RM 12 (3.97USD) for the pink cab that  you can ride from Palau Pangkor town to the Teluk Nipah village. Although there are boats to take you to another island or resort, you can enjoy the public beach without having to hire a boat. 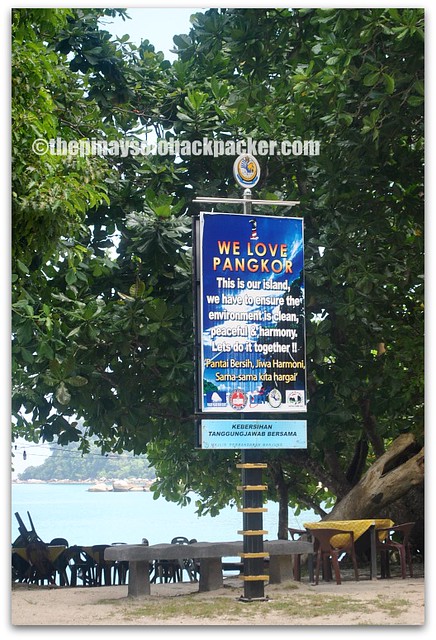 It was early morning and I decided to explore the village by foot.  I initially intended to rent a bike but most hostels are still closed for business that early.  I found a small carinderia at the road side where locals and some tourists dine in with friendly horn bills roaming nearby.  I like having iced milk tea in Malaysia, you can get one for as cheap as RM2 (.66USD), I’m a tea person, so my taste bud really favored  backpacking Malaysia. 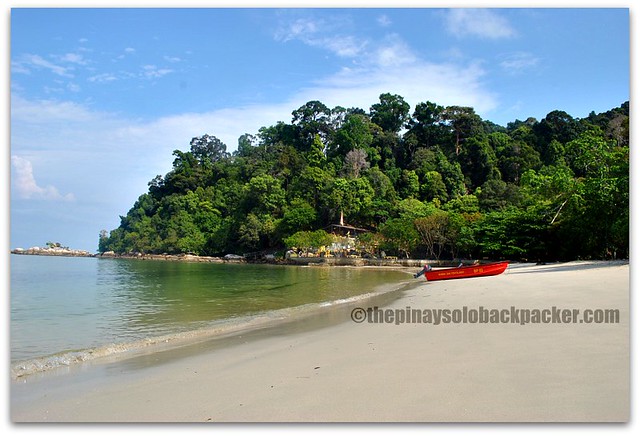 I was walking the cemented road when I chanced up a  naive looking woman in her mid-60’s who came out from the small  forest, she’s wearing a red shirt and a cream hat with a digital camera hanging on her neck.  There’s an old hidden walkway which seems to lead to the hill and the beach.   I thought she was a local, so I smiled ad gestured that I would walk up the unknown path, she smiled back. 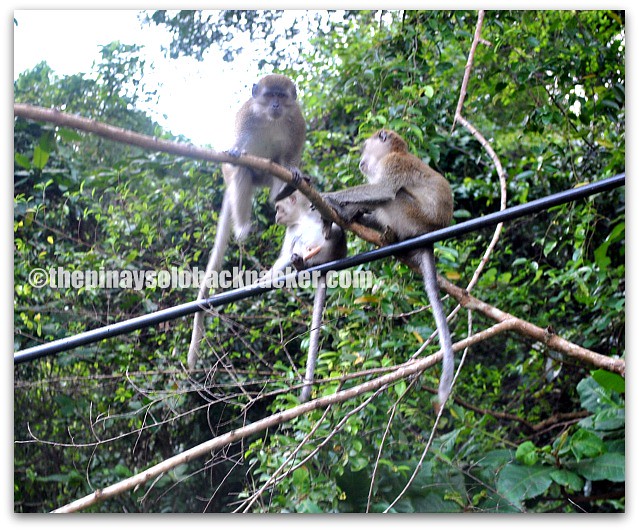 “Do you know where it leads to?”, I was taken aback because I thought she already left, but turned out she was following me.  “No,but I believe it either leads to a forest or to the beach”, I answered. “You are so brave, I thought you this place, can I join you?”, she asked politely.  Her name is Ella, and she is a Chinese missionary based in Singapore, at her age, she has traveled some countries alone.  Like me, she just came from Ipoh where she slept with her friends.  She’s a short woman, shorter than me in fact, and she looks so fragile, so I was kind worried seeing her  travel alone.  But of course I was wrong, looks can be deceiving as they say, she’s traveled some parts o the world by herself for years.  I enjoyed taking her photos and listening to her stories. I never met such an interesting woman of  her age travel alone during my trips, only old men. 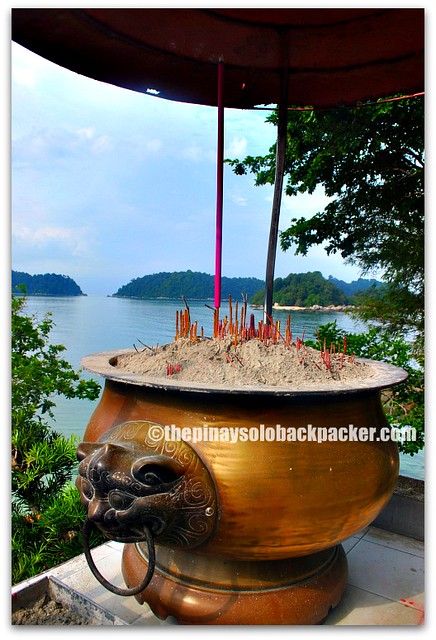 The path turned out to lead down the road again, like we we’re walking in circles, but I’m glad she joined me because I figured it looks like there are snakes hidden out there in the  small forest  and the atmosphere is really creepy with all those dry leaves  falling,  the silence of the wind and the towering trees surrounding us only to find out later that it’s a secret hub of the monkeys.   “ The receptionist told me there’s a huge fish at the end of that resort“,  Ella pointed towards a huge signboard with an arrow pointing left.  “I always look for something unique and interesting when I travel, thus I am determined to see that  big fish“, she continued. 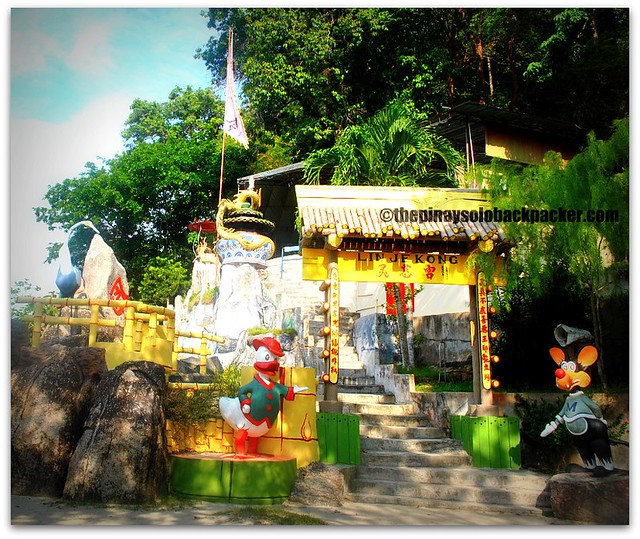 So I joined her in search for the big fish, passing by murky streams, resorts and torn shacks, and we ended up in  a white sand laid back beach.  Oddly enough there’s a Chinese temple on top of  a cliff  surrounded by Disney characters.  I  never expected to see Donald Duck and Mickey Mouse mingled with the  Chinese Gods you know!   Nevertheless, it’s a beguiling sight, the stairs  leads to the temple with a  brilliant view of the beach and another footpath heading to the other side of the island.   The  old man in his 60’s manning the temple showed us around without asking for anything in return.   They spoke in Chinese, and Ella told me the guy thought I am Malaysian. I’m always mistaken as a local whenever I travel in South East Asian countries. 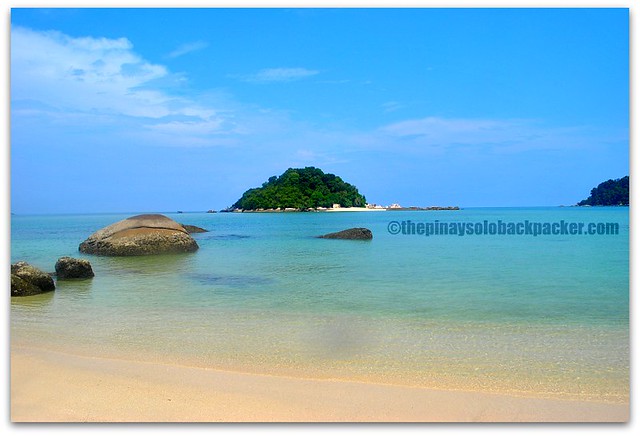 Ella is in a hurry as she needs to check out by noon from her hotel  and return to her friends in Ipoh.  I would’ve asked to join her since I’m bound for Ipoh too, and just couch surf at her friend’s house but it skipped my mind because I was too elated to swim.  Some locals approached Ella offering snorkeling and boating on a “better” beach, but I declined because I wanted to wallow at the beach by myself without being bothered by anyone but the heat of the sun.  After all, this is a much deserved bliss after being restless for weeks. 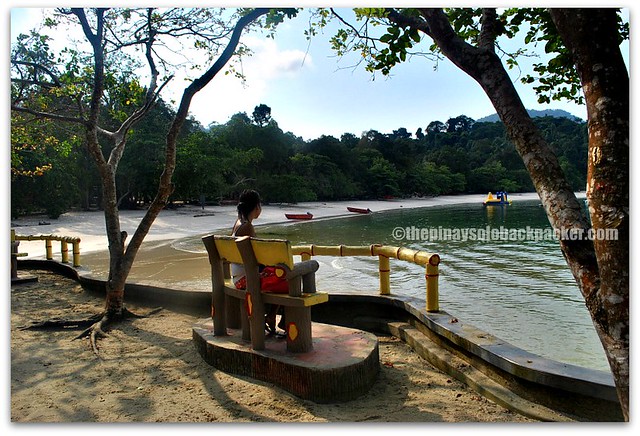 *This is part of my Malaysia backpacking series.