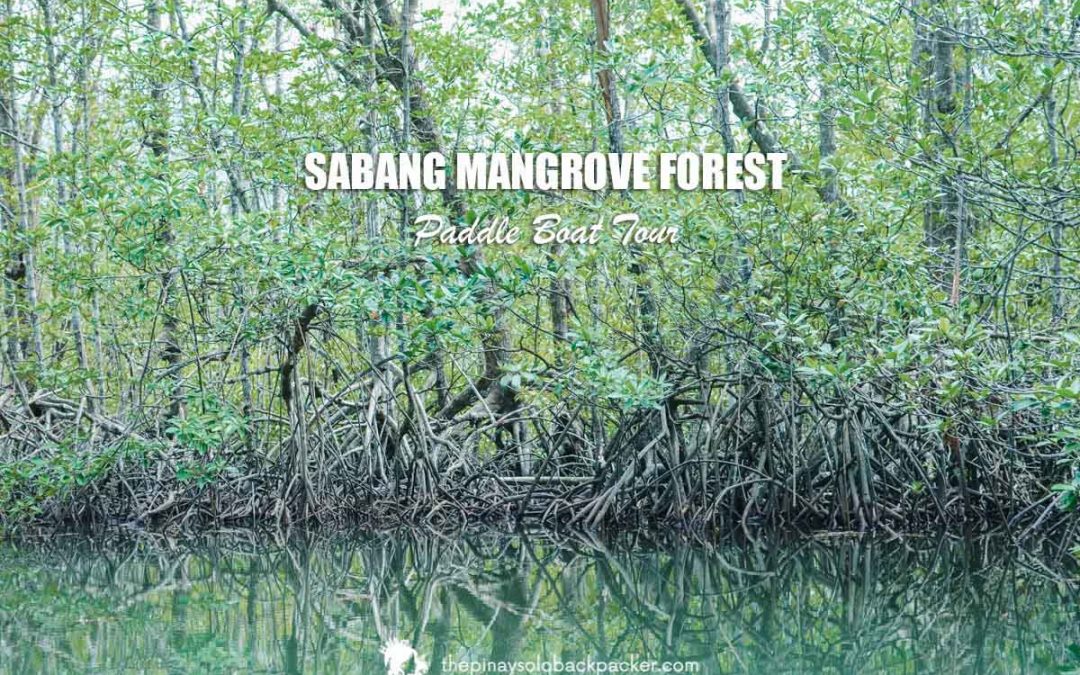 Detailed travel blog on how to get to Sabang Mangrove Forest tour, entrance fee, boat tour rates, eating tamilok, and other things to do in Sabang, Puerto Princesa.

If you fancy tropical beach cliché, forest road, and pastoral scenery, then Sabang village is for you. Pleasantly situated in Brgy. Cabayugan in Puerto Princesa, it is best known as the jumping- off point of the Puerto Princesa Underground River in St.Paul’s Bay.  While most tourists often leave Sabang immediately after the underground river tour, there’s more to this sleepy village. Sabang is actually home to some of Puerto Princesa’s pristine beaches like Sabang Beach, Manlipien Beach, and Central Park Station Beach, often overshadowed by the more famous islands in Honda Bay. Adding up to its raw appeal is the bountiful Sabang Mangrove Forest hidden nearby. On our recent trip to Palawan, we visited this often-overlooked tourist destination.

Sabang Mangrove Forest is one of the eco-tourism destinations in Puerto Princesa. Like any other mangrove forests in the world, it plays an important role in our biodiversity; serving as nutrient-rich habitats and breeding grounds for a variety of birds, snakes, monkeys, reptiles, fish, crabs, and other marine organisms. Another importance of mangrove forest is its climate resilience, as the mangrove roots above the ground slow down water flows and encourage sediments deposits thereby helping prevent erosion. Their roots also filter pollutants in the coastal waters, and they protect coastal communities during typhoons by absorbing storm surges and flooding. Mangroves are also used in livelihood as timber, fuel, food, and medicine. Studies also show that mangroves are colossal carbon sinks, absorbing 4 times more carbon than rainforests or any other ecosystems.  The carbon is stored in their soil underwater known as blue carbon. To sum it up, mangroves have enormous contribution to our environment, communities, and ecosystem. Despite that, many mangrove forests are under threat.

Upon arrival at Sabang Mangrove Forest, register and pay the tour fees. You will be assigned to a boat with your boatman who will paddle the boat and tour guide who will explain about the mangrove forest. Each boat can sit up to 8 passengers.  Wear your life jacket for your safety before hopping on the boat, because the fern green water here is quite deep. 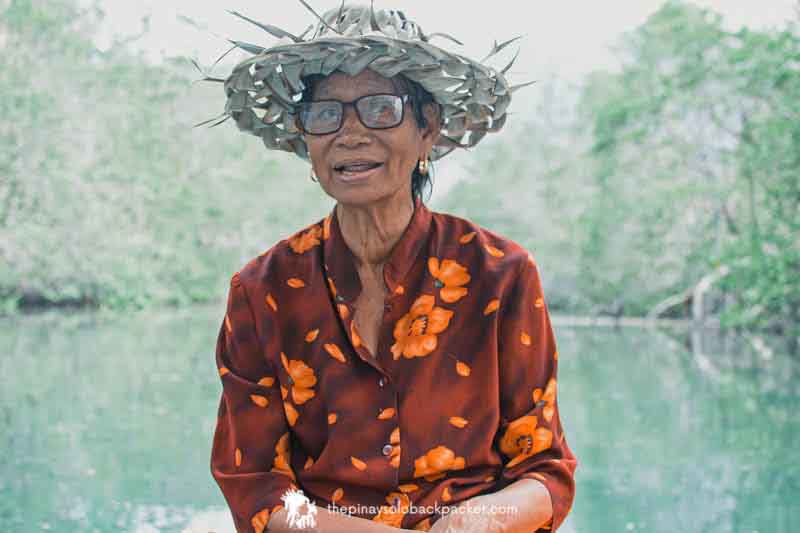 I really appreciate my experience of the Sabang Mangrove Forest. It reminds me of the time we kayaked on our own through the mangrove forest in San Vicente.  But for this tour, we really paddled through the mangrove forest that gave us an astounding view into the heart of this serene territory. Our boatman, Tamilok King, rowed through the niches of this salty paradise, while Lady Mangrove, our amiable tour guide, explained the history and stories of the mangrove and showed us the wildlife that will make you appreciate this eco-tourism activity. 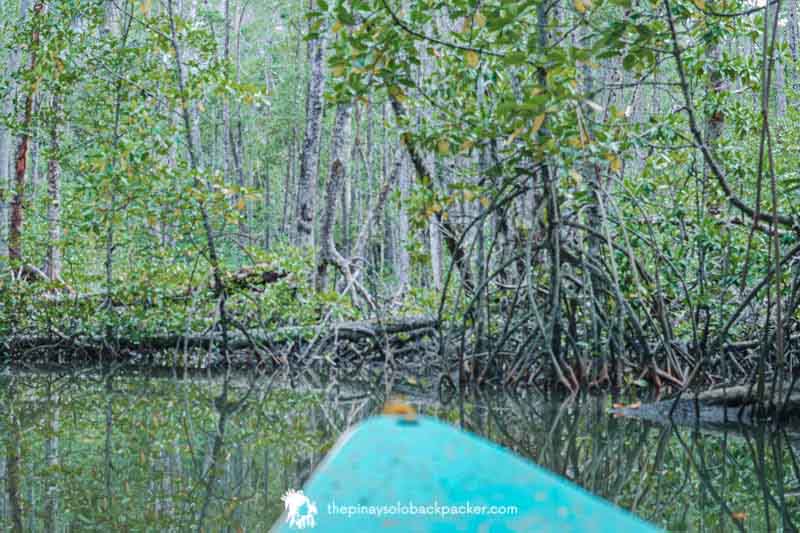 Sabang Mangrove Forest is home to many marine animals and reptiles including the the  mangrove snake (Bioga dendrphila) and the water Asian monitor lizard (Varanus salvator), which looks like a smaller Komodo dragon of Indonesia.  During our mangrove tour in Sabang, we also spotted some resident monkeys playing above the mangrove trees. Sabang Mangrove Forest is also a birding spot, it is reportedly home to some endangered birds such as the Palawan peacock pheasant (Polyplectron emphanum), the stork-billed Kingfisher (Halcyon capensis), and the white-collared kingfisher (Egretta sacra). We didn’t encounter any of those birds, but if you visit the Palawan Wildlife and Rescue Center (Crocodile Farm), you can see some of those rescued birds. 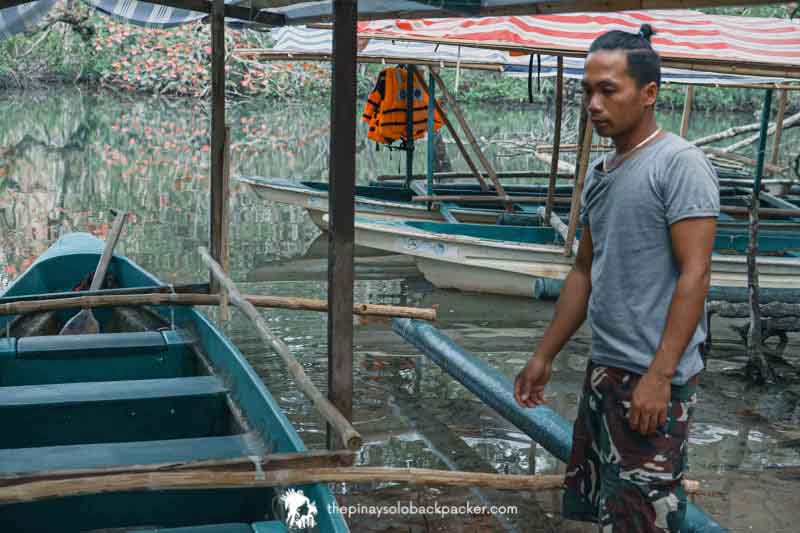 Straddling both land and sea, the towering age-old mangroves in Sabang are so enchanting.  The dense knot of their prop roots that serves as nurseries for fish and marine life make them appear to be standing on stilts above the water. And they help the trees endure the casual rise and fall of tides. The mangrove branches that offer habitat to birds and other wildlife sway beautifully to the cool breeze. And their gorgeous leaves are reflected on the emerald green waters. I imagine how it looks like early in the morning, it must have been breathtaking to see the mist-filled jungle. But since we visited in the afternoon already, I found comfort in experiencing the pleasant  Komorebi, a Japanese word for scattered light that filters through the canopy of the forest when the sunlight shines through the trees.  While making our way back, our knowledgeable guide, Lady Mangrove, sang her own version of a Tagalong song for the Sabang Mangrove Forest.  It was an unreal experience. 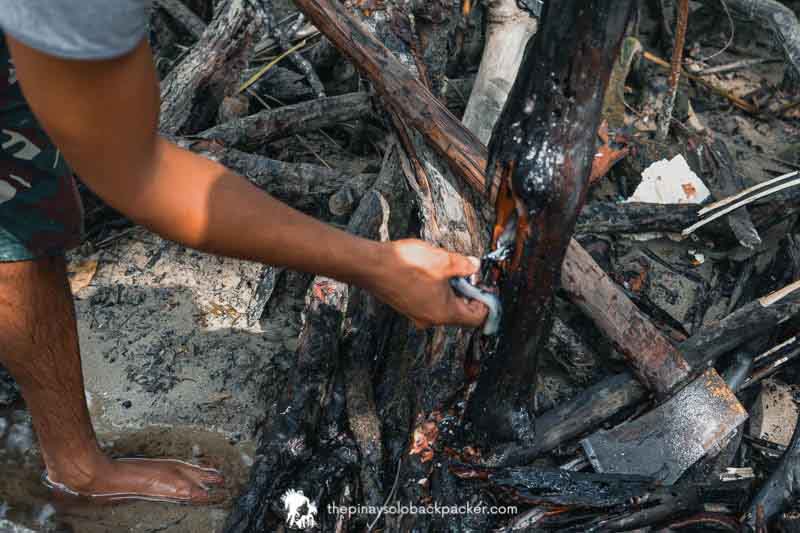 tamilok inside a dead mangrove wood

After our  Sabang Mangrove Tour, our boatman excitedly showed us how to get the famous Puerto Princesa delicacy called tamilok (woodworm). It’s actually a species of salt water clam called Teredoi navalis, nicknamed naval shipworm because it makes its way to the wood. Tamilok in the Philippines thrive on mangroves, mostly found on dead submerged mangrove trees.  Our boatmen split the rotten wood open and found tamilok.  Lady Mangrove, our guide, then cleaned it with saltwater before finally cleaning it with tapwater.  Tamilok is typically served like kinilaw (ceviche). It is cured in vinegar, salt, lime juice, and chili. Then, you can swallow it whole. 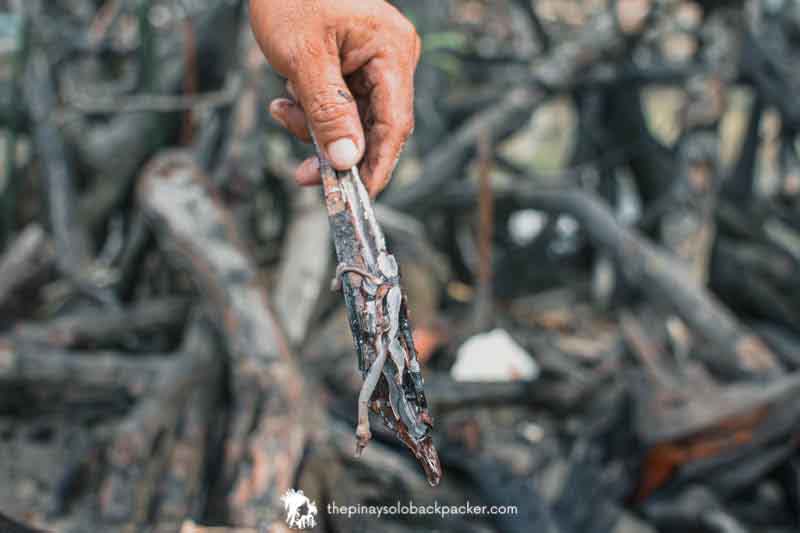 I’ve tasted tamilok before, but I‘ve never seen it prepared raw, its procedure, from getting the deadwood, to splitting it open, retrieving tamilok, cleaning it,  and curing it. It was a unique experience. How does tamilok taste? For me it tastes like oyster, kind of milky, salty, and gummy. I highly encourage you experience eating tamilok while in Sabang or Puerto Princesa. It looks outrageous, but it’s delicious! 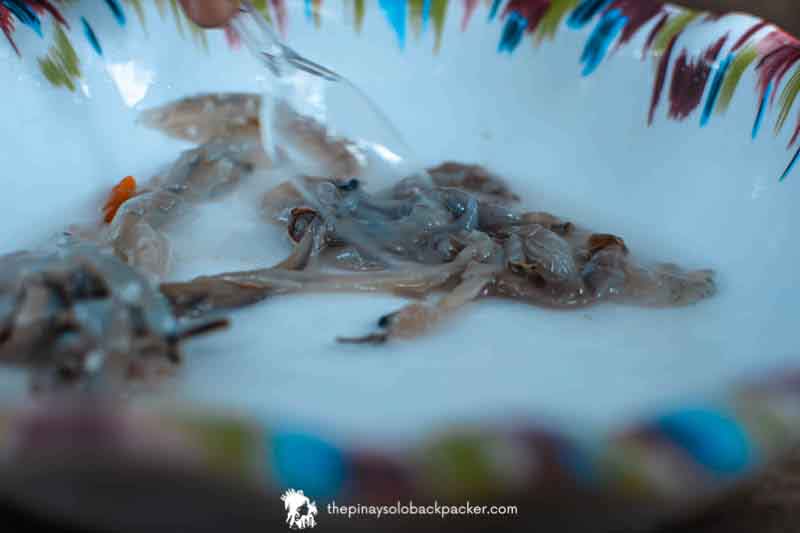 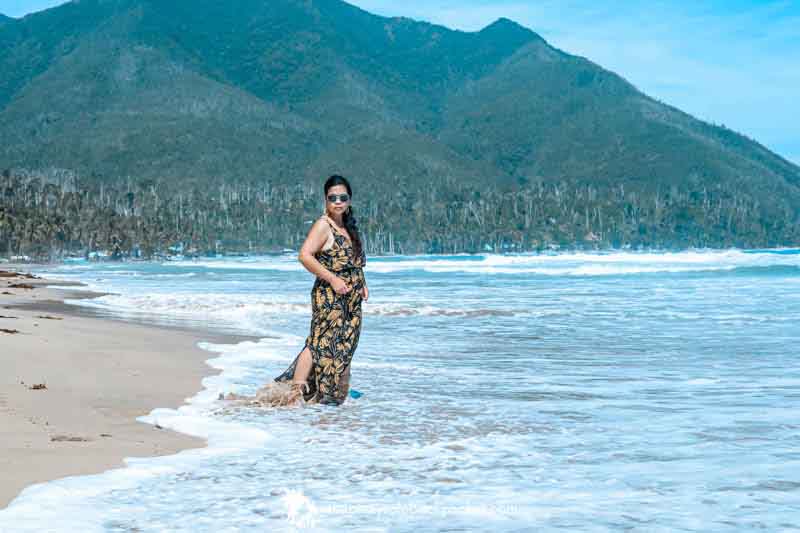 If you still have more time, you can swim or hang out at the nearby Sabang Beach. If you’re up for more adventures, try the Sabang X Zipline at Manlipien Beach.

HOW TO GET TO SABANG MANGROVE FOREST 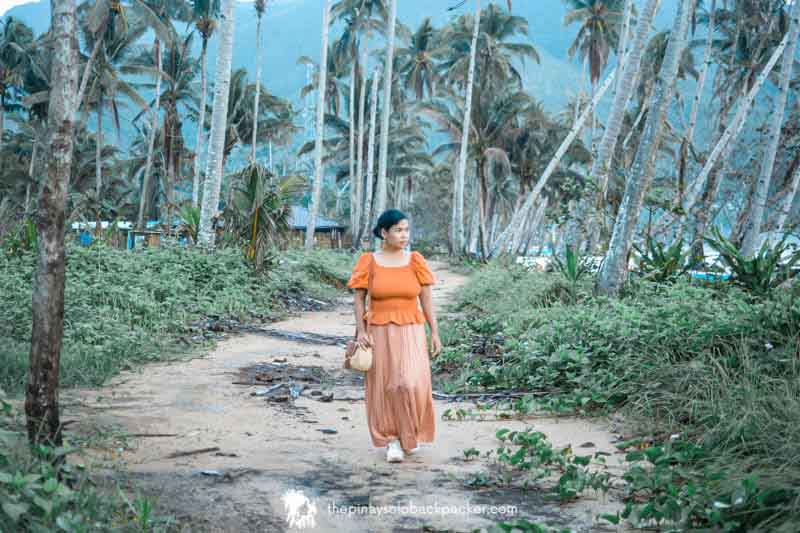 Use Google Maps, or better yet, ask the locals. Take the main dirt road along the beach fringed by tower coconut trees. If you’re facing the sea and the boats parked on the coast, it’s on the right side.  You will pass by homestay, guesthouses, and luxury resorts. It’s right after the Daluyon Beach and Mountain Resort. 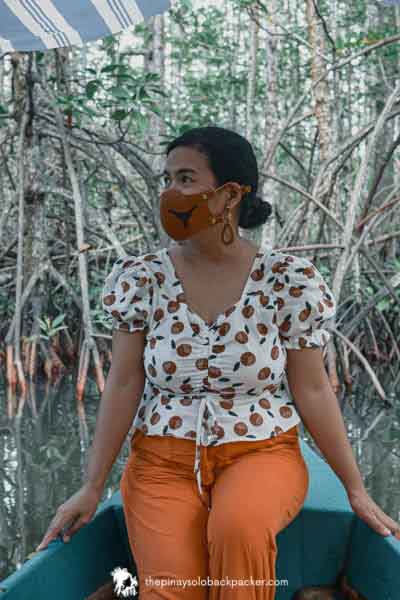 WHERE TO STAY IN SABANG, PALAWAN 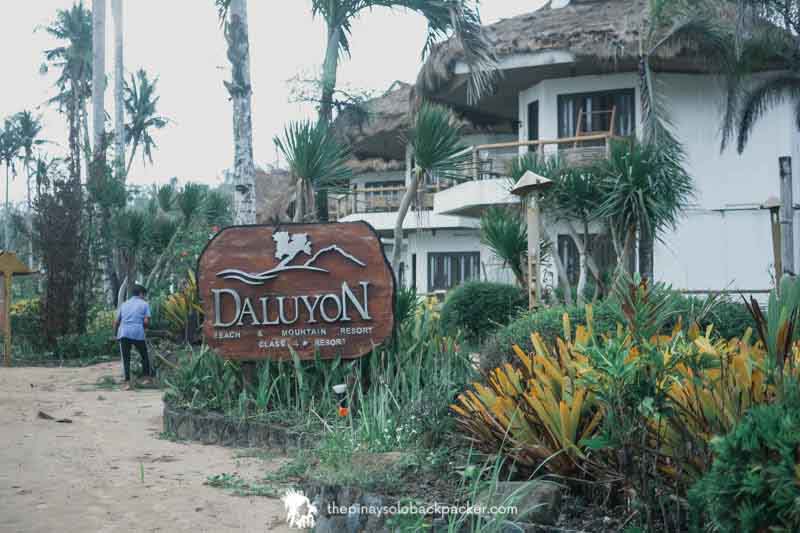 Daluyon Beach and Mountain Resort, where we stayed during our Puerto Princesa Trip

If you’re planning to stay overnight in Sabang, Puerto Princesa, here are some of the accommodations in the village:

The following are the budget accommodations in Sabang, but they’re not DOT-accredited:

*The Department of Tourism has an ongoing campaign called “#KeeptheFunGoing” where people are encouraged to do simple and fun gamified campaign sustainable challenges such as “zero-waste warrior”, “certified foot soldier”, “restourism advocate challenge”, and “ecostaycationer”.  For more information about the challenges and more ways to be a sustainable tourist, visit: philippines.travel/saveourspot