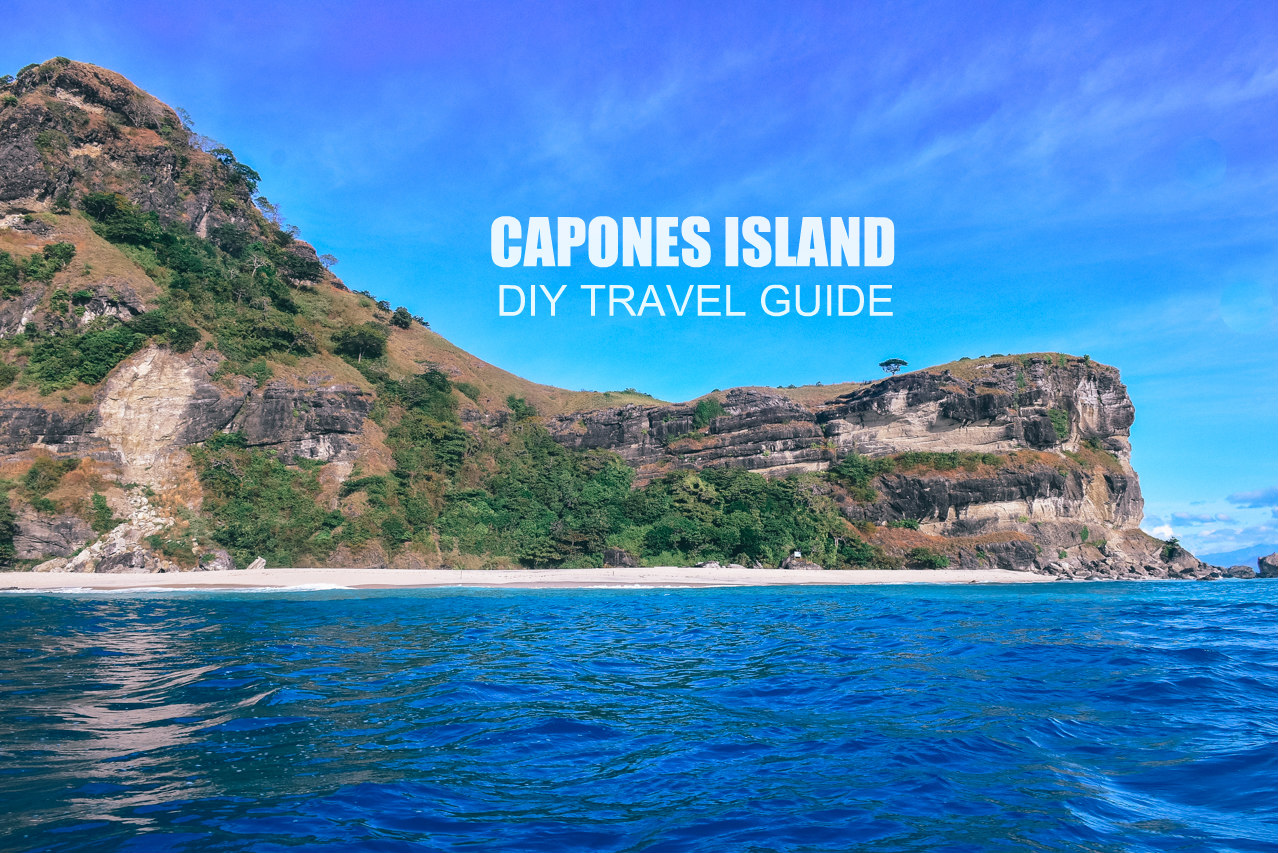 If I remember it right, Capones Island is the first island I visited for travel. Yes, I’ve been to an island in Sorsogon before but that’s strictly for Archaeology and Anthropology fieldwork back in college. When I fell in love with solo travel, I visited Pundaquit village in San Antonio, Zambales.  I remember standing on the shore of Pundaquit beach and watching the nearby Capones Island.  That time, I met a  boatman who offered me island hopping to Capones Island, Camara Island and Anawangin Cove.  But then I figured, it would be fun if I tag along my sisters, so I told him I will return a week after. And we did.

Recently, I returned to San Antonio, Zambales to go island hopping in Capones Island, Anawangin Cove and Nagsasa Cove.  And surprisingly, despite having visited some other beaches in the Philippines, I still find Capones beautiful.  This bone-shaped island has rocky shore, lapped by denim blue water.  Its wind-swept cliff that plunges into the maddening surf is crowned by a charming, age-old white lighthouse making it more dramatic, like a scene from a travel movie. It’s the kind of place where you’ll get a true taste of island life, no crowd, just you  and raw nature.  You can picnic and eat the grilled seafood on the beach with your feet on the sand.  And best of all, its sister islands are sprinkled around, just a boat ride away!

If you are planning to travel to Capones Island soon, here’s a travel guide with itinerary and budget to help you plan your trip.

WHEN TO VISIT CAPONES ISLAND 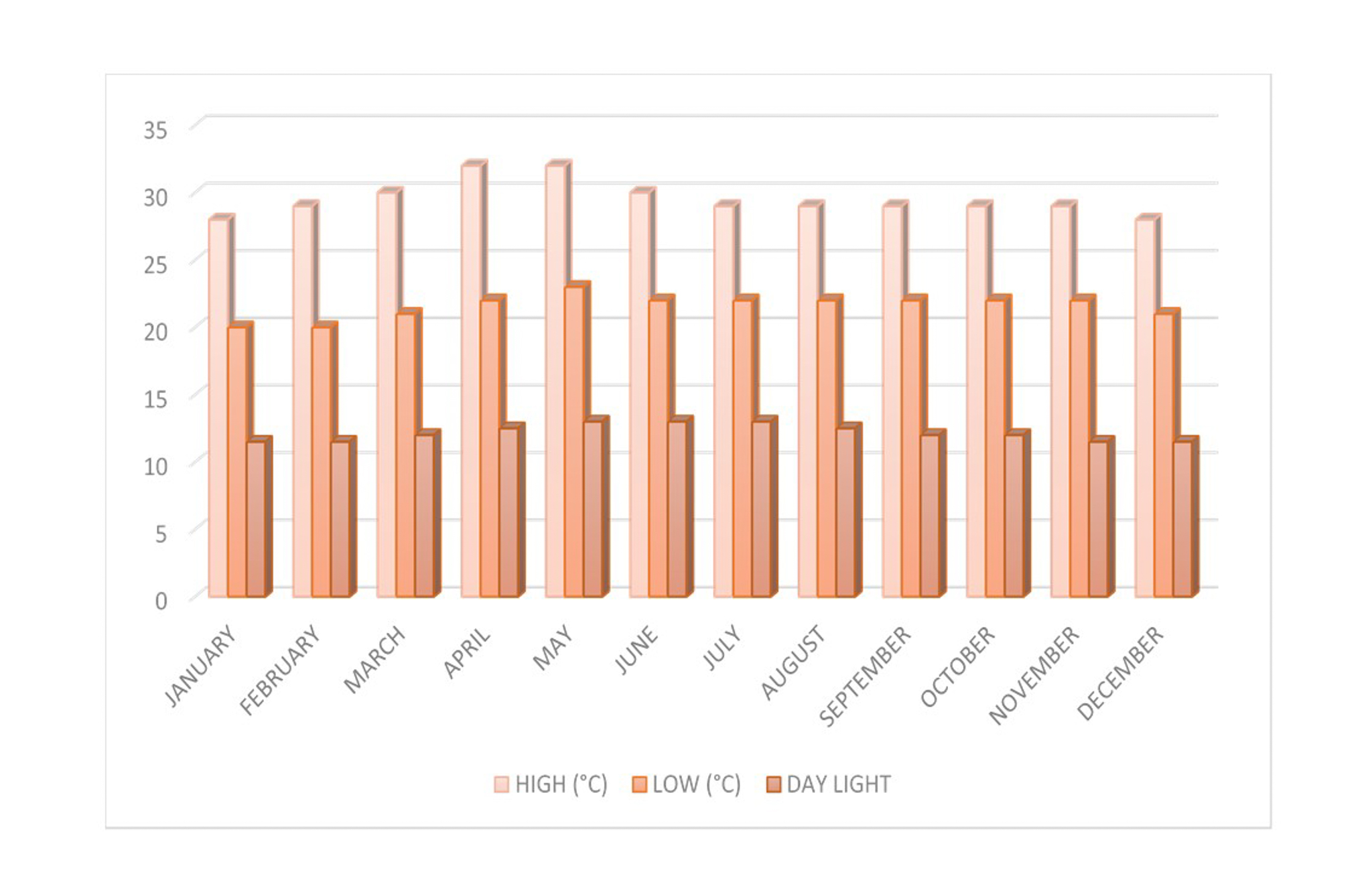 The best time to visit Capones Island is during the dry season – March to May, so your boat won’t have a hard time bringing you to the island.  The sea is also calmer during the said months, so you can enjoy swimming.

HOW TO GET TO CAPONES ISLAND FROM MANILA

So how to get to Capones Island from Manila? It’s quite easy.

3.Take a tricycle to Brgy.Pundaquit. Transit time is about 20 minutes.

4.Hire a boat to take you to Capones Island.

HOW TO GET TO CAPONES ISLAND FROM CLARK, PAMPANGA

1.If you are coming from Clark, Pampanga since the nearest airport is Diosdado Macapagal Airport, you can ride a shuttle to Dau Bus Terminal for PHP 100/USD 2/EURO 2.

3.At Olongapo bus terminal.  Transfer to a bus to Sta. Cruz, Zamables or Iba, Zambales. 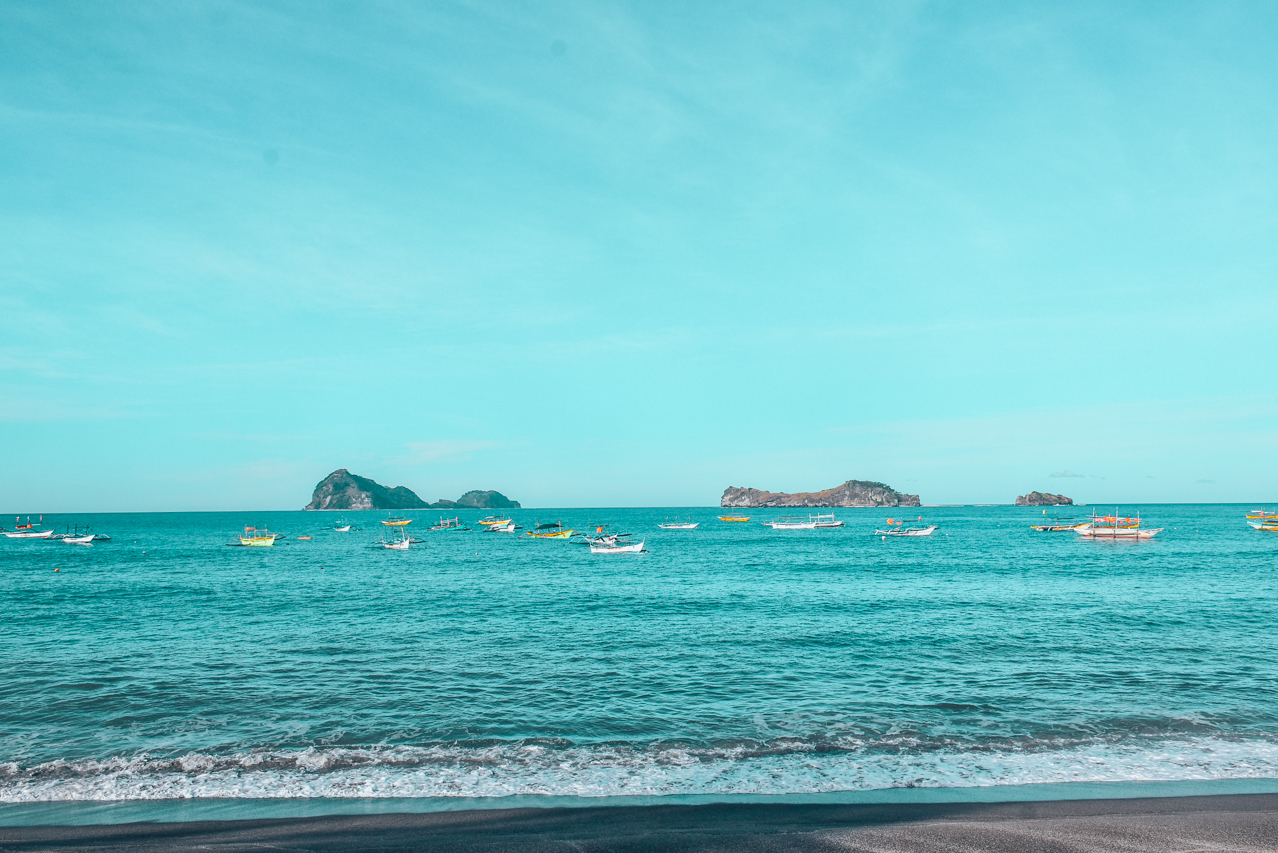 HOW TO GET TO CAPONES ISLAND FROM SUBIC, OLONGAPO

1.From Manila (Pasay, Cubao, Caloocan or Earnshaw), you can take a bus (Victory Liner) bound for Olongapo (I suggest you take the Olongapo bus via SCTEX for faster travel time). Travel time is about 3-4 hours and fare is around PHP 245 (USD 5 /EURO 4/SGD 7/MYR 20).

4.At Brgy. Pundaquit, charter a boat to take you Capones Island. 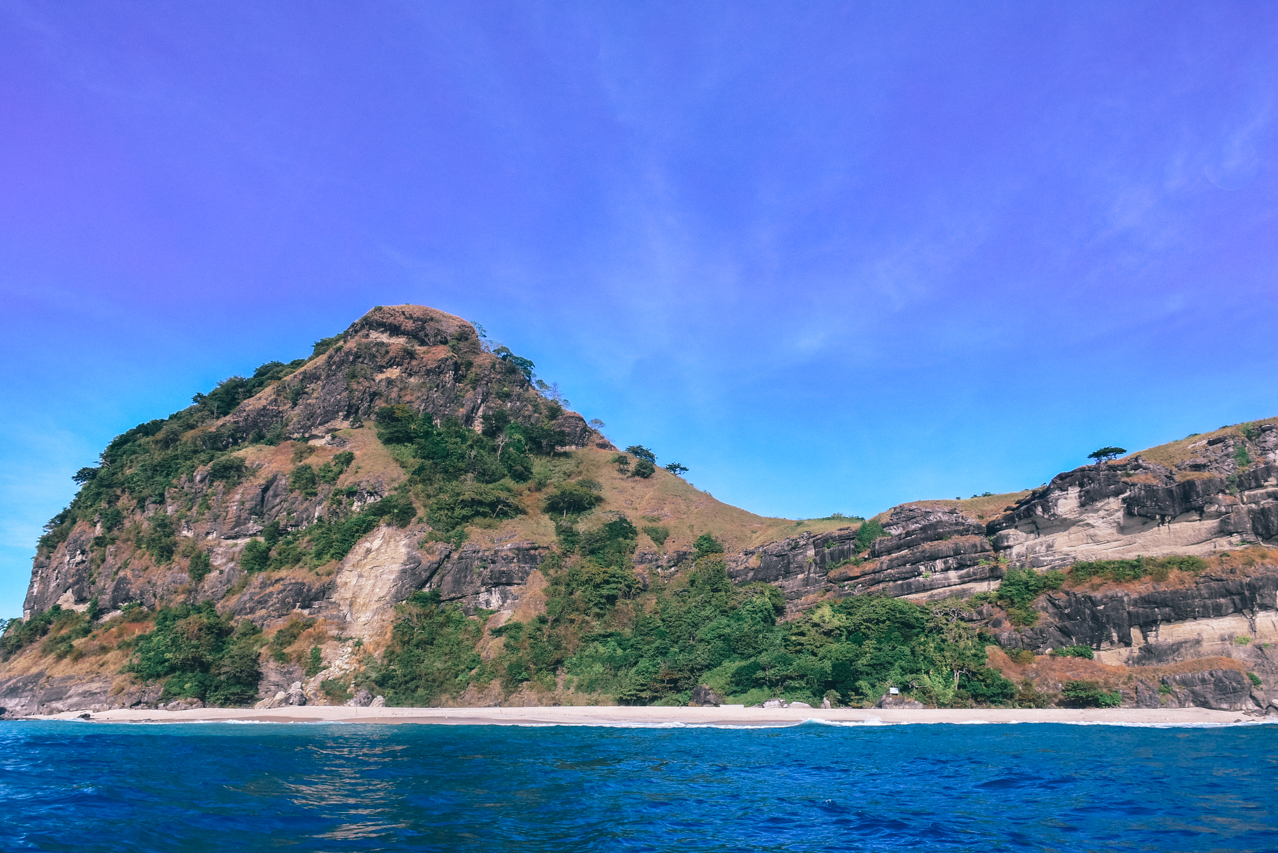 THINGS TO DO IN CAPONES ISLAND

SWIMMING – There’s not a lot of activities to do in Capones Island.  You can go swimming, just be careful, choose the area where the sea is calm because Capones is known for its dangerous waves during the wet season.

SEE THE LIGHTHOUSE –  There’s a beautiful Spanish-era lighthouse in Capones Island that you can trek.  The lighthouse is named Faro de Punta de Capones, it was constructed sometime in 1890.

PHOTO OP – Capones Island is one my favorite islands in Zambales, as it is very picturesque.  You can find many spots that are truly Instagram-worthy. This is a perfect beach to unleash the inner model in you! haha

WHERE TO STAY INCAPONES ISLAND

There are no resorts in Capones Island.  You can book a resort in the village of Pundaquit or in San Antonio town or go camping in Anawangin Cove or Nagsasa Cove.  Here’s a list of beach resorts in San Antonio, Zambales. 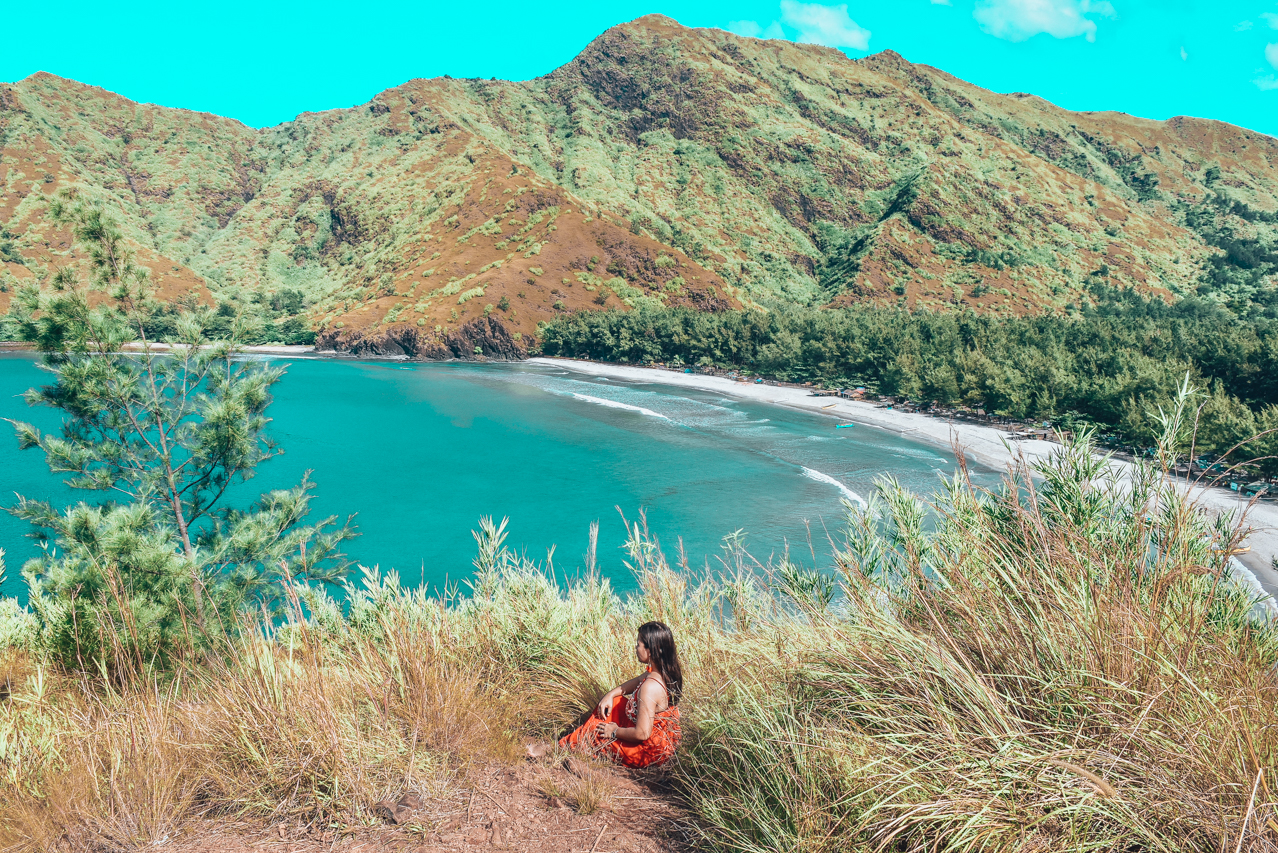 CAMARA ISLAND – When traveling to Capones Island, you can maximize your time by going island hopping.  You can also visit Camara Island, which is located nearby.

ANAWANGIN COVE– This is another picturesque island in San Antonio, Zambales, about 30 minutes away from Capones Island.  It has deep blue green water and  powdery grayish ash sand hemmed in by agoho trees.

If you have limited time and you just want to just do a day tour to Capones Island, here’s a sample itinerary with budget.

If you plan to stay overnight, here’s a sample  Capones Island itinerary. I suggest you camp in Anawangin instead. 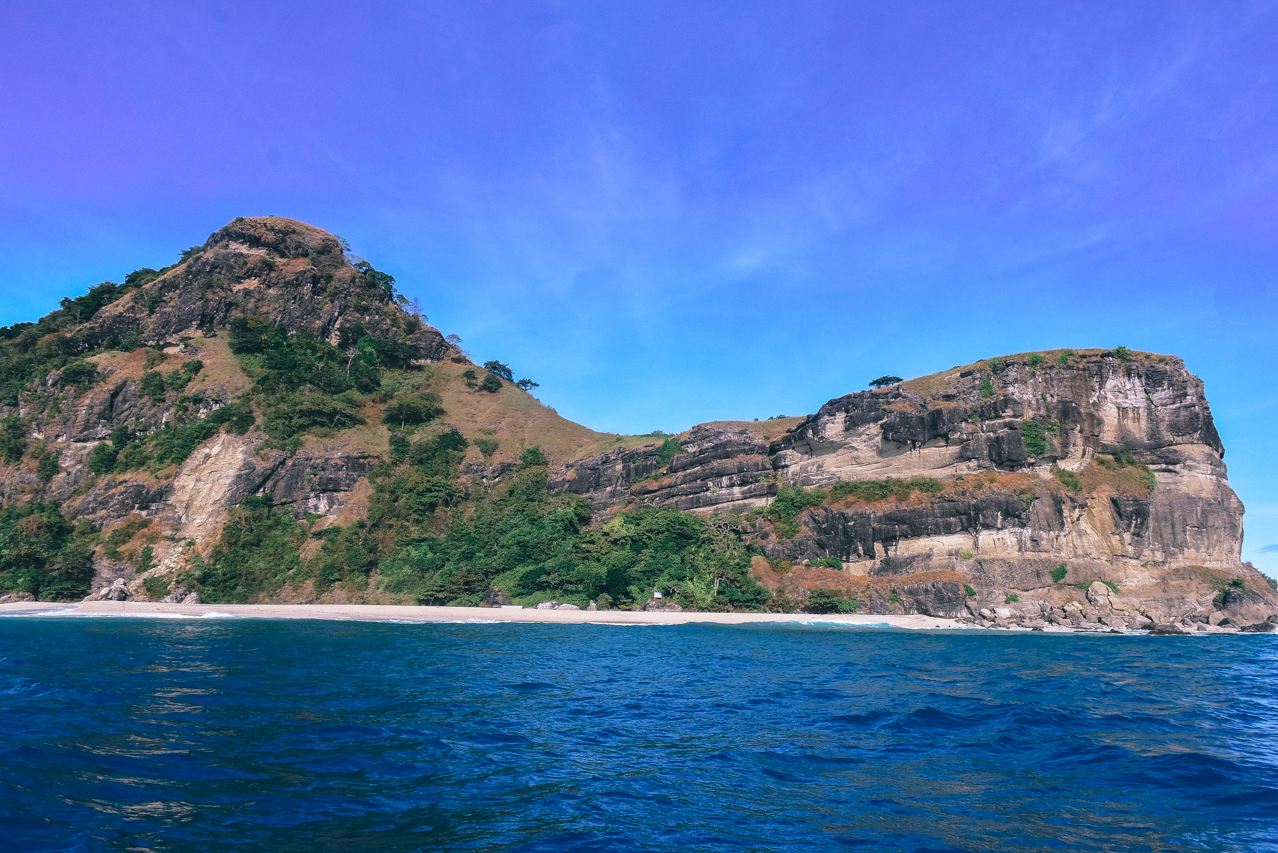 Here’s a list of possible expenses when traveling to Capones Island. This is good for a solo traveler.  If you are traveling with someone or you are a group, trip expenses will most likely be cheaper since you will be sharing the boat rental.

Always check the weather updates before proceeding to Capones Island for your safety especially during the rainy season.

There are times when you can’t dock at Capones Island because of the waves, if that’s the case, proceed to Anawangin Cove instead if possible.

Always wear life vest whenever riding the boat. Capones waves are quite dangerous.

Be careful when swimming, choose a calm beach area, as the waves and current in Capones Island can be pretty strong especially during the rainy season.

There’s no electricity and mobile signal in Capones Island.

Bring your own tent, food and drinks as there no stores, restaurants or any establishments in Capones Island. It is an uninhabited island.

Bring sunblock and insect repellent if you plan to visit here.

Do not throw your trash anywhere nor leave it in the island.  Take your trash with you.