Travel Guide : Brunei to Kota Kinabalu By Ferry and By Bus (UPDATED)

I’ve been getting queries about crossing the border from this tiny yet wealthy country in Borneo.  Brunei is not usually included in the usual backpacker’s trail (just like my dear country the Philippines) but  it is undoubtedly as charming as the rest of  it’s neighboring countries in SouthEast Asia. 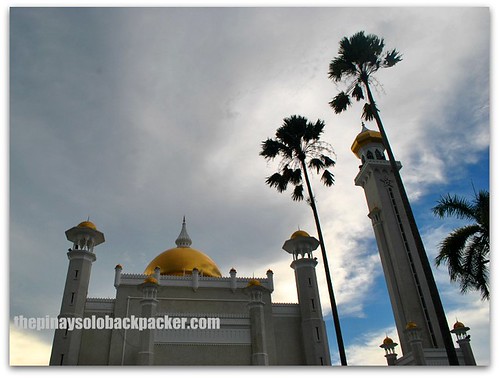 Border to Kota Kinabalu (Malaysia) from Brunei and border crossing Brunei to Malaysia is quite easy. Even going through the Brunei  & Labuan (Malaysia) Immigration is easy because they’re used to Filipino workers crossing from Kota Kinabalu Malaysia to Brunei and from Brunei to Malaysia. Just be ready to endure the long line. I suggest you get out of the ferry as soon as possible  and  hurry to get to the line first.  But no worries, the ferry won’t leave until everyone is done.

I’ve been asked a few times if the Brunei Malaysia border crossing by ferry is safe and convenient.  Yes, it is safe and although it’s not that spacious and big, there are enough sits to accommodate the passengers and there are hardworking ferry employees  roaming inside to assist the passengers with their luggage.  The ferry is air-conditioned and there’s  a small TV inside for entertainment and  cheap snacks being sold. 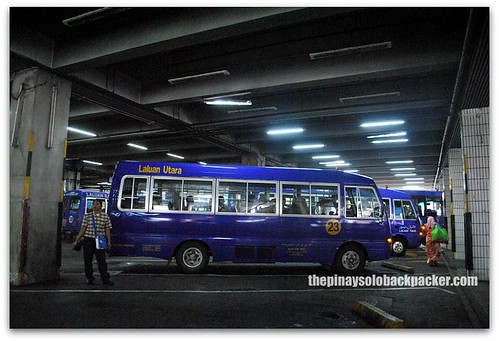 How to get to Muara Ferry Terminal from Bandar Seri Begawan?

To get to Muara Ferry Terminal in Brunei, ride a Muara express bus  (bus with pink and silver stripes; bus fare B$2) from Bandar Seri Begawan bus station.  Bus to Muara leaves every 30 minutes and runs from 6:30 am to 7:00pm.  The bus dispatcher is a Filipino named kuya Raymond (or was it Richard?) , you can ask him for some Brunei travel tips like where to eat, where to stay, alternative bus routes, etc.  Too bad I only met him when I was on my way back to Kota Kinabalu , I would’ve saved more on my Brunei holiday trip.

Alternatively, if you have extra bucks to spare, you can also take a taxi from Bandar to Muara ferry terminal for around B$35.

Take note that you have to change boats.  Ferry from Muara (Brunei) leave for Labuan (Malaysia)  and from Labuan you need to take another ferry to Kota Kinabalu. 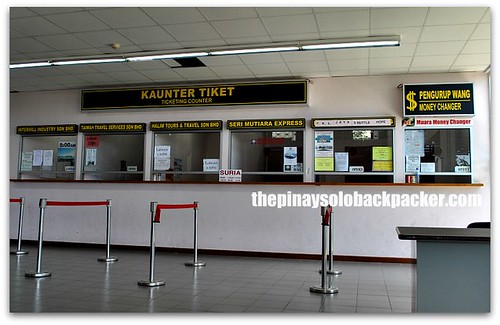 I highly suggest you leave Bandar early, take the earliest bus so you’ll be in time for the 1st trip of the ferry to Labuan.

Bus fare to ferry terminal is B$2.

Bus is the one with pink and silver stripes.

Bus operates until 7:00 pm however you will already miss the last trip of the ferry  to Labuan which is 4:00 pm.

If you miss the ferry from Labuan to Kota Kinabalu. You can stay overnight at Labuan, there’s a cheap dorm room called Papa Jacks for RM20 with A/C. (Be wary though that Papa Jack is kinda nice to Caucasians only and is not too friendly with his fellow Asians. I misplaced his contact info and the dorms address but as soon as I find it,I’ll update this post.)

Alternatively, you can also take an Express Bus Service from Bandar Seri Begawan, Brunei to Kota Kinabalu. Bus leaves at 8:00 am and is stationed near the Chinese Temple. 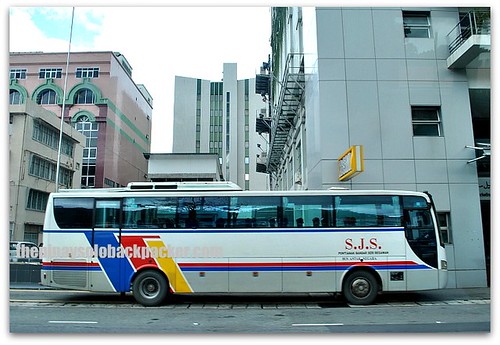 Bus station of bus from Brunei to Kota Kinabalu photo