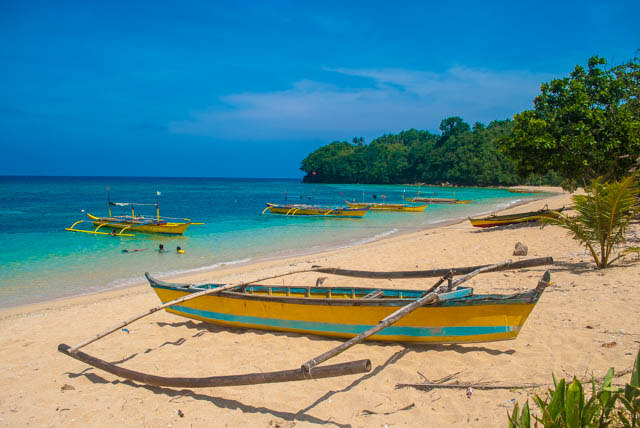 CATANDUANES: The Unseen Beaches of Virac

One time you’re chilling at your hotel in the city proper, next thing you know you’re at the back of a motorbike hopping from one postcard-worthy beach to the next.  This is exactly what I did in Virac, the unassuming capital of Catanduanes province geographically located in the easternmost part of the Bicol Peninsula but separated from the mainland Bicol by Maqueda Channel and the Lagonoy Gulf. 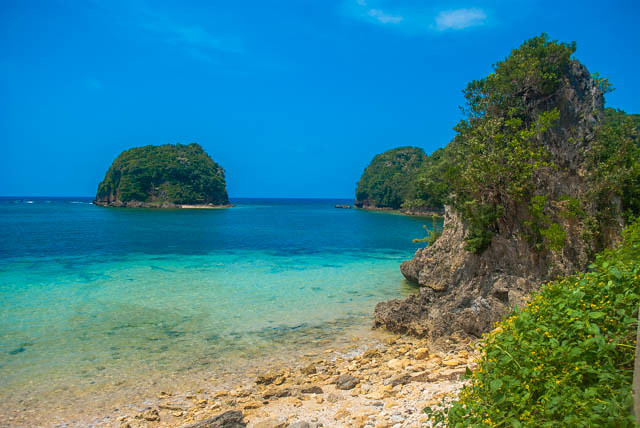 Catanduanes earned the moniker “The Land of the Howling Winds”, mainly because it is the first landmass in the Philippines to kiss the Pacific Ocean, making it directly open to the to the path of tropical storms entering the country.  Thus, some of its beaches produce ceaseless waves that are perfect for surfing, like the majestic Puraran Beach, the region’s surfing mecca where Bicol’s surfing culture was born.

But while Catanduanes is fast gaining attention for surfing, the province has more to offer, from undulating valleys, jungle-clad mountains, palm-fringed beaches, mystical caves and pristine waterfalls to vast agricultural lands, old Spanish-era churches, hand-woven traditional products and seafood overload.  Even its often hightailed capital – Virac has some of the best beaches in the province like what I have discovered during my Catanduanes trip.  And I wish to showcase their beauty through this Catanduanes travel blog. 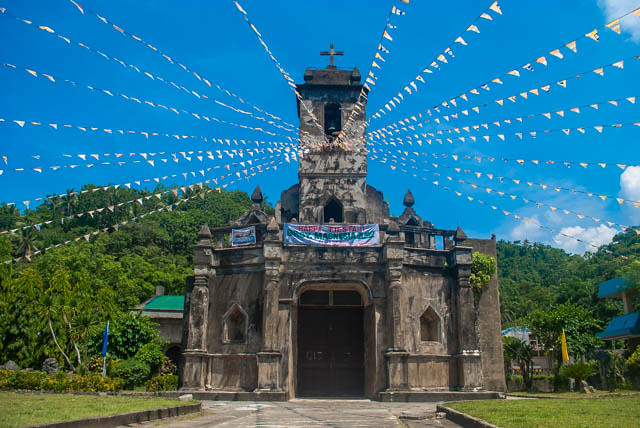 An archaic chapel on an outskirt of Virac.

Yes, Virac is not all about the cafes sprinkled around the town square, the modest Museo de Catanduanes housed at a beautifully-restored heritage mansion, or the colossal Virac Cathedral.

Holding a newly-bought EZ map, I contacted the motorbike driver I serendipitously met the previous day.  Without saying where I came from, he tells me her mother hails from my hometown, one of the reasons why I preferred him to take me around town.  But even though he has lived in Catanduanes for years, the naïve, young man has not explored the beaches of Virac himself, which pretty much made our exploration more exciting. 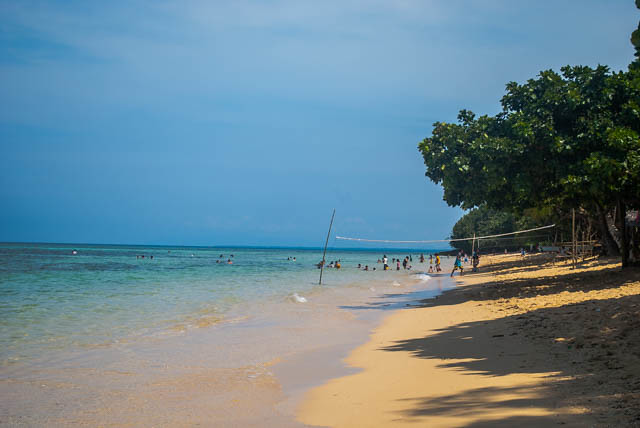 Mamangal Beach is a local favorite.

We wound up south of Virac where most of the fine sandy beaches are located.  We got lost, so instead of heading to the famous Twin Rock Beach Resort of Puraran in Catanduanes,  we were already past Sto. Domingo Bridge on the main highway.  Fortunately, at that point, it is wise to make a detour to Mamangal Beach.  This piece of paradise seems like a local favorite. The placid sun-spangled sea was jam-packed with locals swimming and children frolicking in the water.  Others were playing beach volleyball, and a good number were taking respite under the shade of the trees standing shoulder to shoulder on the shore.

Our next stop was Balite Beach and along the road, we stumbled on some cheerful yet camera-shy kids with their grandmother hanging out by the roadside Surprisingly, the  road network on this part of Catanduanes is paved, unlike in other provinces in the Philippines where far flung communities are nearly unreachable because of hellish roads. 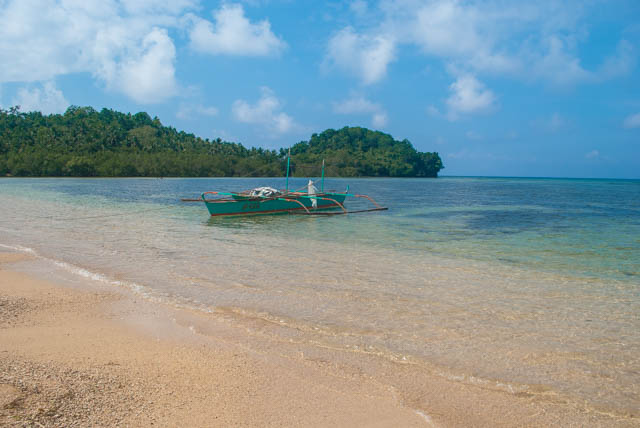 Having said this, reaching Balite was swift. In contrast to Mamangal Beach, the seaside is virtually empty, save for two children by the shore and an empty fishing boat floating in the sea.  Balite Beach is hemmed in by an unpretentious fishing village, and nearby, a gorgeous mangrove forest is thriving against the tide.  I reckon there was nothing much to do there except for swimming, the beach is also devoid of any luxury trappings nor open cottages where tourists can relax.  But the huge swath of golden sand here spreads hundred of yards wide, which could offer lots of room for Frisbee and sand volleyball courts.  They may want to consider that in the future if they want to develop this beach to attract more tourists.

We head on to the next beach we saw on the Catanduanes map – Marilima Beach.  This is by far my favorite Virac beach, the inconceivable turquoise water dappled with yellow fishing boats is simply stunning, seducing visitors like me to take a dip in the refreshing water. Definitely my kind of beach to get tanned, picnic and feast on seafood!  Here, small coconut palms back powdered-sugary soft sands and perfect waves peel off in several directions on the bay. 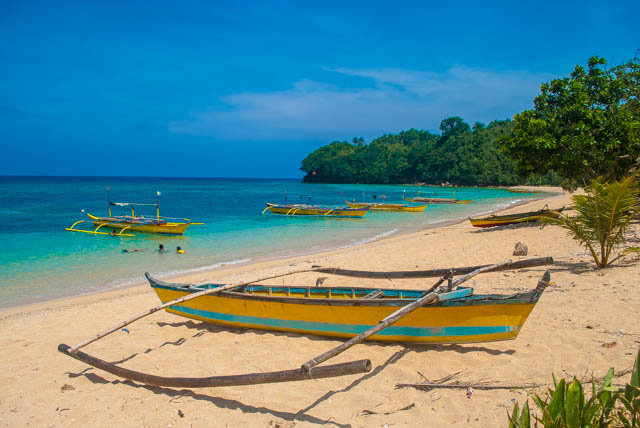 The glimmering azure beach in Marilima.

Nearby Marilima, are two other beaches worth visiting: the sun–spangled Batag White Beach and the Bosdak Beach.  These two lovely stretch of white sand surely also add up to the catalog of beautiful surprises in Virac.

We decided to go further to check out Talisoy Beach which is reportedly a breeding ground for pawikans.  Unfortunately, we missed it and found ourselves at its more famous neighbor – the Twin Rock Beach Resort.  Unlike most beaches we explored in Virac, this last one proves to be more developed and has made its mark on Catanduanes’ tourist map.

My exploration of south Virac only proves that this cozy countryside escape of pastoral rolling hills and vast stretches of sandy beaches is worth unraveling.   And your wallet need not be endowed to journey here, simply charter a motorbike (or tricycle if you are traveling in groups) and the rewards of such explorations may be immense.  True enough, its sheer isolation summons every creative soul to immortalize its beauty in pixels. 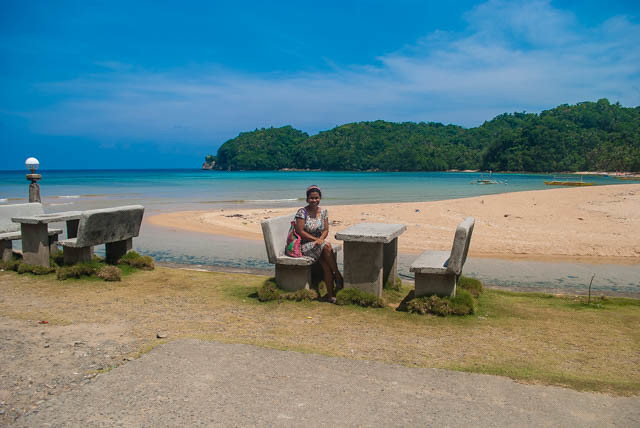 HOW TO GET TO VIRAC CATANDUANES:

Alternatively, you can take a bus bound for Tabaco City, Albay from Cubao, Pasay or Alabang in Metro Manila. From Tabac wharf, hop across the sea through a RORO ferry to reach the island of Catanduanes.

You can catch the ferry that leaves for Virac at 6:30 AM or if you miss that, take the 1:00 PM ferry to San Andres.

From San Andres seaport, you may charter a tricycle to Virac (recommended if you are in groups) or ride a jeep en route to Virac which is usually parked outside the harbor.

Where to Stay in Virac: