Some ads are really striking that it sticks in our mind even as we grow older. Call me curious, but who wouldn’t?  Since I was young I have seen that classic ad of Dakak Beach Resort in Dapitan through the noontime show – Eat Bulaga. For years I wondered how luxurious that place must be where only wealthy tourists can afford to go on vacation. 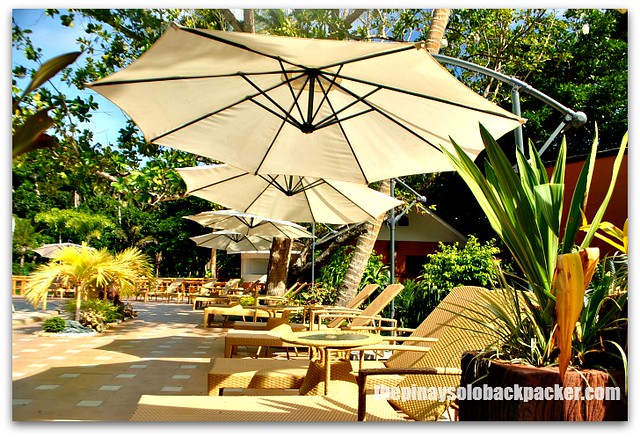 Dakak Beach Resort is located in Dapitan, Zamboanga del Norte.  Dakak is actually a name of a village in Dapitan, the name is said to be derived from the sound of the bird that thrives in this place. It is actually one of the safest and peaceful places in Mindanao. It is well known as the haven of Jose Rizal, the national hero of the Philippines and the first theme park in Mindanao- Gloria de Dapitan.  Dapitan is blessed with majestic white sand beaches and  it has a pretty good diving spot to flaunt like diving in Dakak Beach Resort. 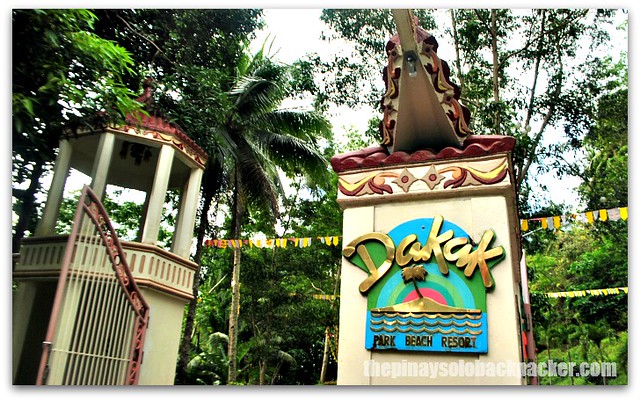 So when I heard that Dakak Beach Resort offers day tour, I was more than ecstatic. I imagined myself walking on the most spectacular stretch of coastline, my feet sinking quickly in its soft sand.  I sit and dig my hands on its powdery white sand, lay my camera on the side and start walking to the beach. I swim in its translucent ribbon of azure and emerald waters.

I waved my hand, and the tricycle stopped in front of me with an amiable-looking tricycle driver. His hair has been discolored by the unforgiving sun and so is his skin. He was wearing a printed brown polo and tailored pants. He smiled and inquired politely where I was going. I must say that I have pretty good experience with the kind trike drivers in this place. The old man doesn’t know how much to charge since he has never been to Dakak Beach Resort. We settled on a Php 400 roundtrip fare including waiting time.

The road to Dakak from the city center of Dapitan is well-paved but I must say it is pretty far.  Towering mountains with pristine forest can be seen along the road. I can hear birds chirping from the forest. Dapitan’s mountains and forest must be very well preserved; I see no signs of illegal logging. Everything seems untouched. 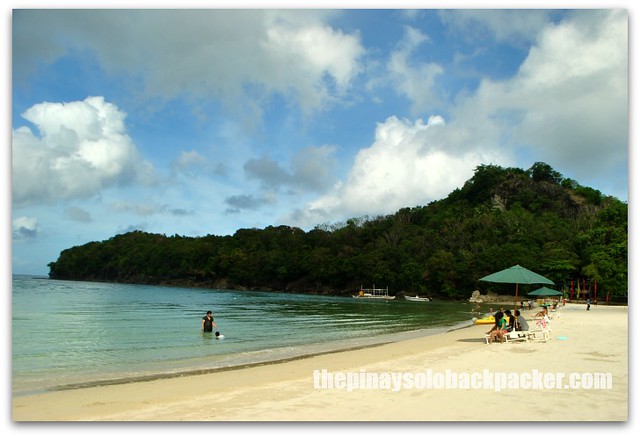 “This place is pretty peaceful, “ the old man  was starting a conversation.  “Yes, surprisingly. In Manila, a lot of people think Dapitan is dangerous because it is part of Zamboanga peninsula, and I used to think like them too. Heck, I was so wrong.” I confessed.  He just smiled. “I’m from Abra, a province in North Luzon, I moved here a few years back when I married my lovely wife”, he started talking about his personal life. “Oh, I’ve been to Bangued last year with a friend.”  “Oh really, I suppose the place must have been developed already, with high buildings and booming industry?,” he asked. “ No. It looks frozen in time.” “Politics is killing the place ”, he said with disappointment. We stopped and he approached a woman with her baby sitting in their shack. I see the woman pointing her hands towards the crossing. 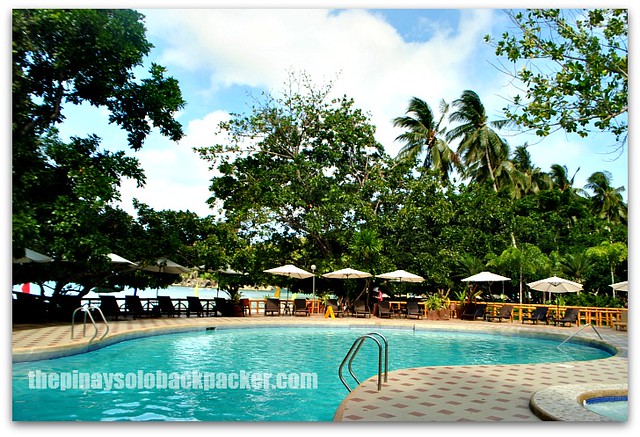 They say, too much expectation can kill you.  Dakak is a private – extremely private – retreat, but it is quite obsolete.  There’s an enormous Chinese Hall that serves as function hall.  Lush manicured garden surrounds the 2 old school designed swimming pools; one is child-friendly, while the other has an artificial falls. A gigantic magnificently-designed ship sits close to the pool, looks to me like a bar that is only open when dusk sets in. There’s a restaurant fronting the beach packed with tourists.  Towering limestone formations surrounds one part of the beach while verdant hills hugging the shores of the calm beach. The day tour fee has increased from Php 200 to Php 500, no food and drinks included. Quite expensive compared to the free admission in the posh Amorita Resort or the Php 50 day tour fee of the magnificent Kawasan Holiday Beach Resort.  The beach seems ordinary, or maybe I arrived a little early ; the sun is not that bright so the true color of the water may not have been revealed yet . The shore is dotted with coconut and talisay trees. I see tourists lounging by the beach, sailing, boat cruising, and waterskiing. 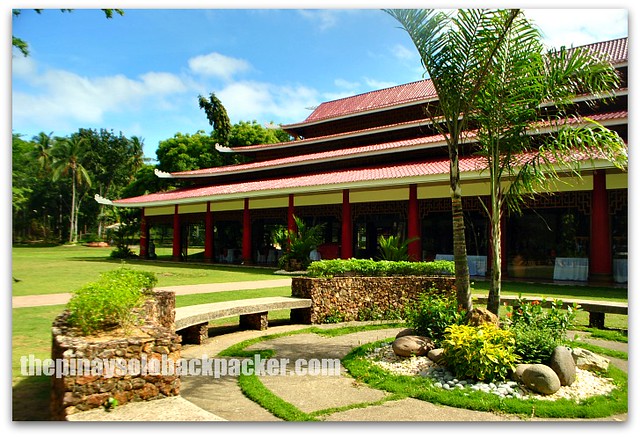 Sadly, I find Dakak overrated. I expected to find modern luxury seamlessly incorporated in its architecture and interiors. Maybe I find the theme of the structures chaotic, like it does not match, one building is Chinese-inspired, while the other is Subanen in architectural style and the other is a huge ship.

But as they say, every place has its hidden beauty, and Dakak’s treasure is their spunky and utterly charming staff. Their passion is palpable and contagious. I was treated like any other checked-in guest. They even made sure I have my souvenir photos. They don’t know me and I am not dressed like their wealthy visitors, but they made sure I enjoy my quick stay. Dakak Beach Resort may not be the island paradise that I have daydreamed of, but it is overflowing with true gems – its gracious people. 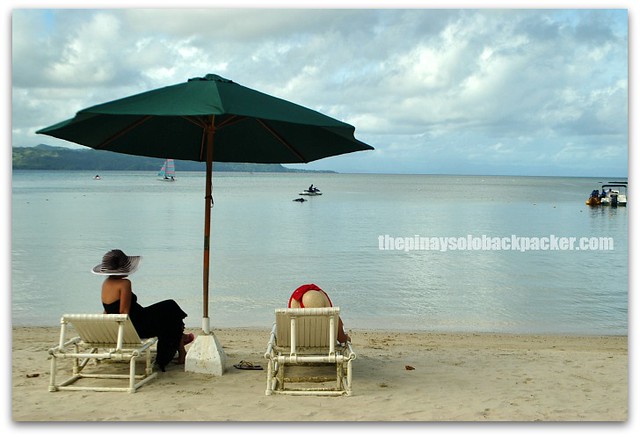 *Dalak is not as expensive as I thought it was.

How to Get to Dakak Beach Resort from Dapitan:

You can either hire a habal-habal (motorcycle) if you are alone or a tricycle if you are in groups. Fare is Php 300-400 roundtrip.

Prepare at least Php 300 per meal if you plan to eat in their restaurant.

I can’t find any official website of Dakak Beach Resort.

The nearest airpot to Dakak is Dipolog city. From there, you can ride a bus to Dapitan (approxiamtely 1 hour).

There are cheap hostels starting at Php 300 (good for 2 persons) at the bay area (near Gloria Fantasyland) in Dapitan.