TOP LA UNION TOURIST SPOTS and How to Get There

La Union is the beating heart of surfing in North Luzon, no wonder tourists flock here anytime of the year due to its consistent waves and beach break that seem to go on forever.   While most surf enthusiasts usually go straight to Urbiztondo Beach in San Juan, other alternative spots for surfing in La Union include Jesus Point in Carille, Darigayos and Bacnotan.  Non-surfers need not frown, as La Union offers other attractions and activities aside from surfing.  Here’s a list of La Union tourist spots and top things to do for first timers in the province. 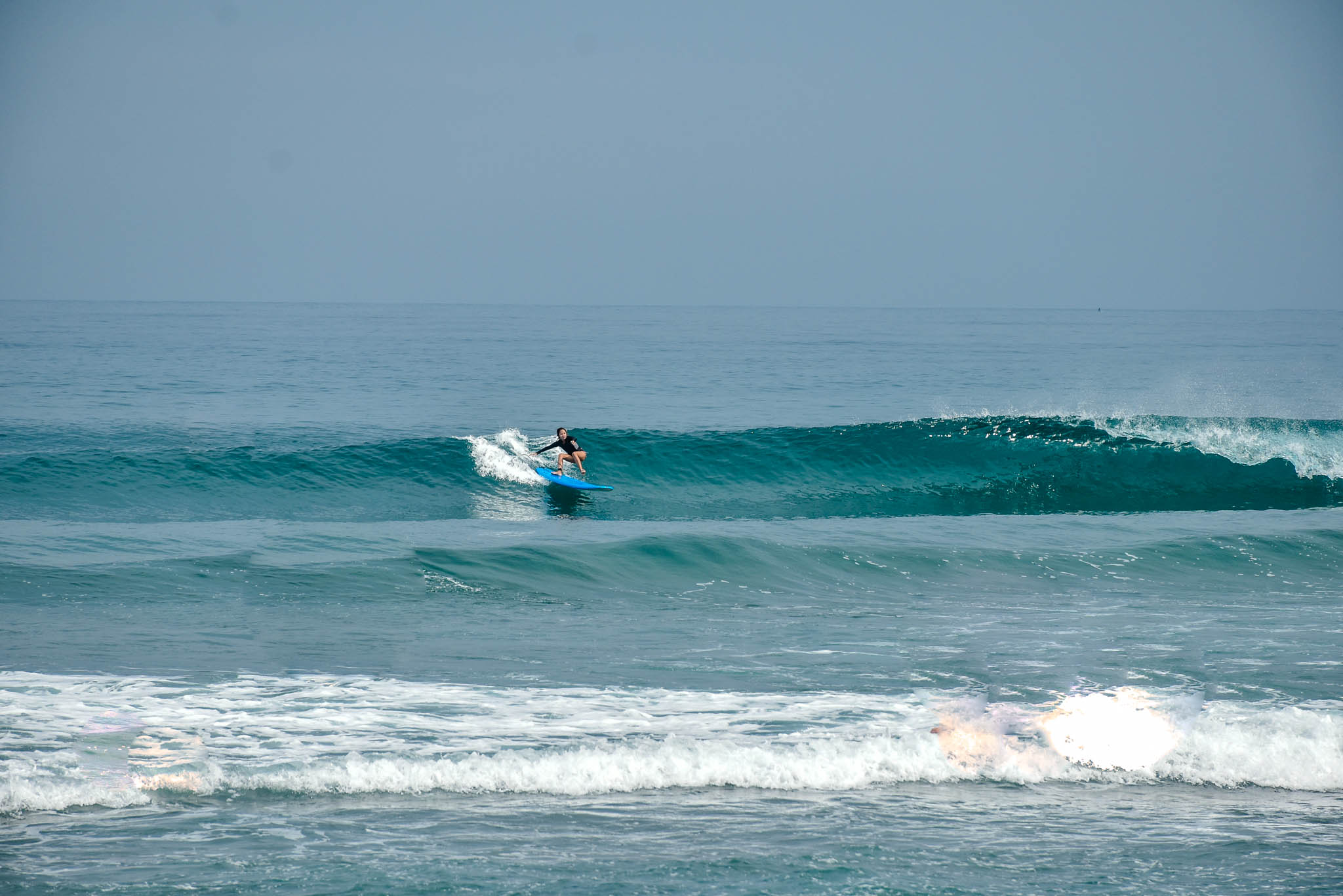 Surfing is a way of life in San Juan, La Union.  Locals and foreigners alike usually rush to Urbiztondo Beach in San Juan to learn surfing or just surf all day.   Surfing in La Union was reportedly started by a Japanese man who trained the locals to surf back in the 70’s.  But it was popularized by Australian surfer Brian Landrigan (father of popular surfer Luke Landrigan) who built a humble 3-room resort here in the 90’s, known today as San Juan Surf Resort. Surfing season in San Juan is year round, but the peak season is July to October due to the South Swell and November to March because of the North Swell. The break here is suitable to beginners, immediate and advanced surfers.

HOW TO GET TO SAN JUAN, LA UNION FROM MANILA

To get to Urbiztondo Beach in San Juan, La Union, from Manila, take a bus bound for La Union  like Partas (Cubao & Pasay), Farinas (Cubao), Viron (Cubao and Sampaloc), Dominion (Cubao) and Philippine Rabbit (EDSA Balintawak and Manila).  Fare is roughly PHP 400 / USD 7.94, travel time is about 5-7 hours.  You may also ride a bus bound for Vigan and Laoag.  Get off at San Juan (Urbiztondo Beach). 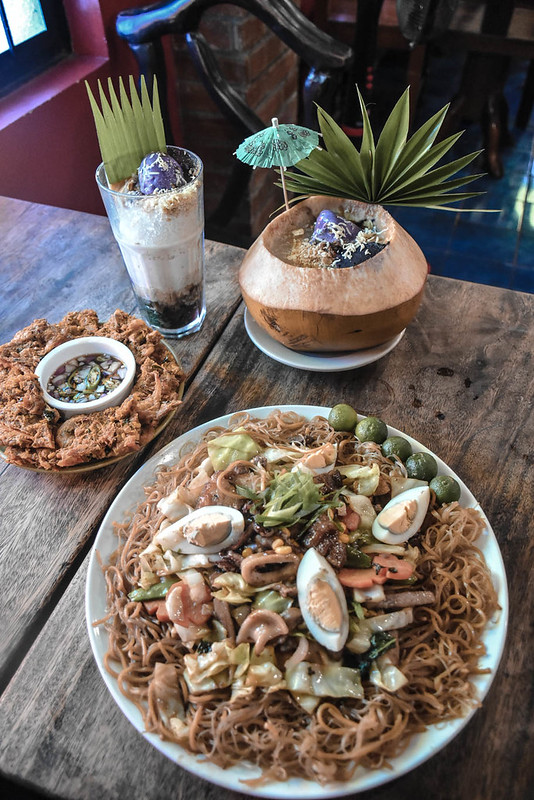 La Union is popularly called “Elyu” by millennials who usually flock here on weekends and holidays to surf and party.  When surfing became popular in San Juan, restaurants, bar and cafes mushroomed along the highway in Urbiztondo Beach.  For non-surfers, you can go on a food trip, restaurant hopping or bar hopping in San Juan.  Trust me, it’s fun, but make sure your wallet is well-endowed as food here usually starts at PHP 200 / USD 4 per serving.

How to get to San Juan from San Fernando, La Union: 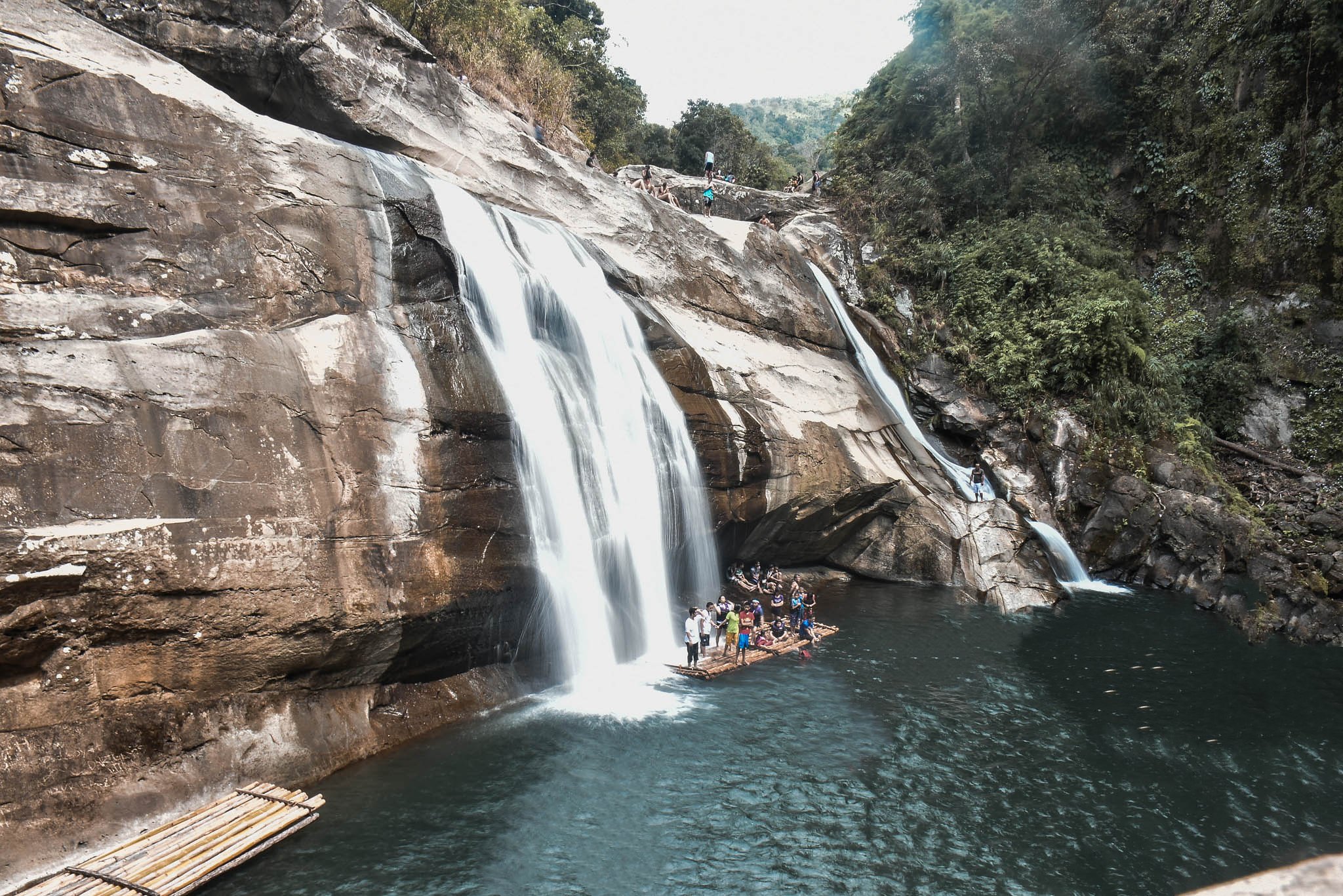 The erstwhile sleepy town of San Gabriel is now one of the top tourist spots in La Union; a magnet of adventure-seekers due to Tangadan Falls.  What makes this waterfall special is the journey to the main falls. Tourists have to hike for about one hour, which involves river crossing in a forest-clad trail.  The smaller waterfall is a popular spots for cliff diving, while the bigger one is perfect for swimming and rafting.  Wear life jacket when swimming or cliff diving for your safety especially during rainy season.  There are available life jackets for rent (PHP 50/ USD 0.99).

ALSO READ:  HOW TO GET TO TANGADAN FALLS IN LA UNION 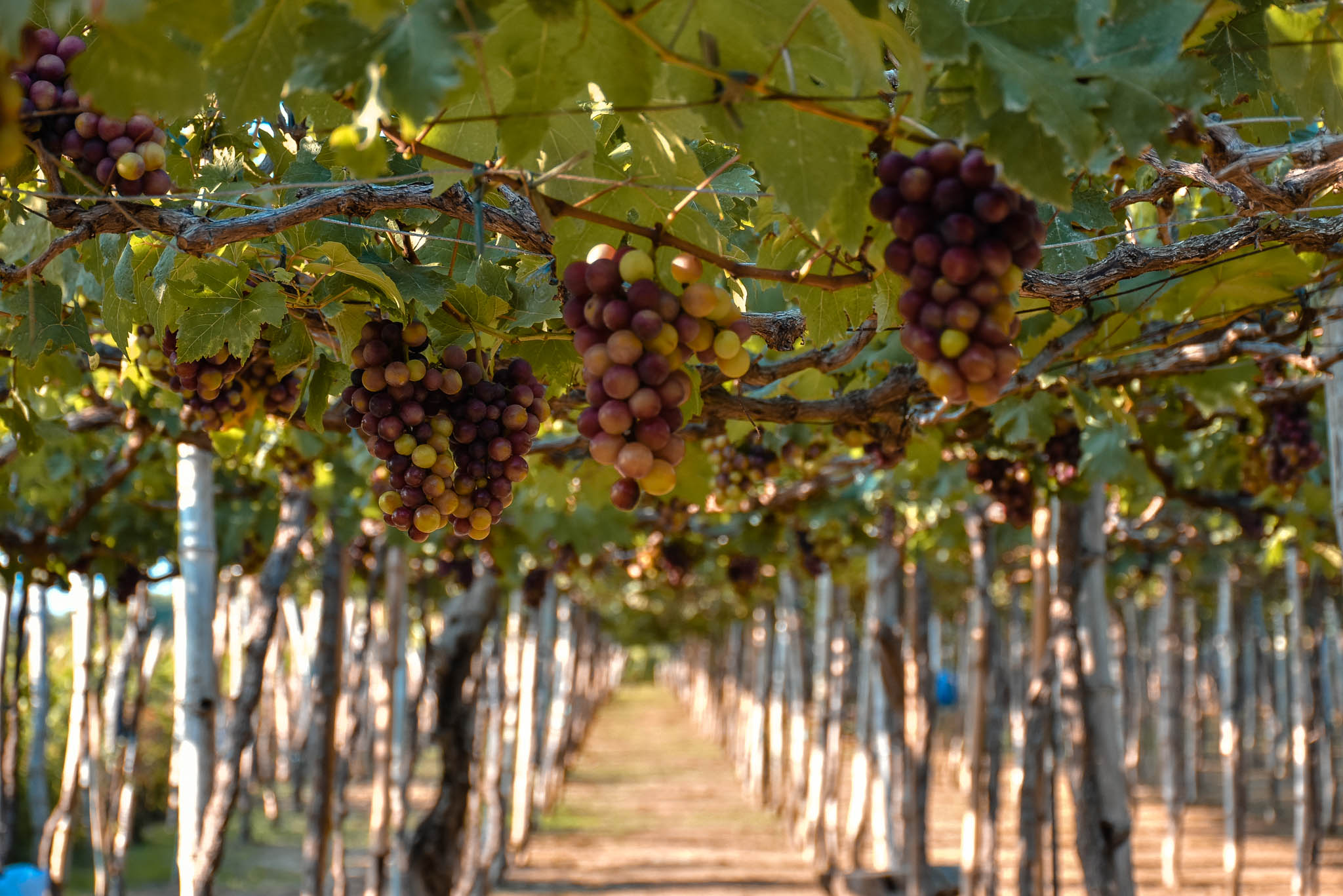 Unknown to many, the town of Bauang in La Union has long been sprinkled with grape farm.  Tourists are flocking here to experience grape picking (seasonal) or have a photo op at the charming grape farms.

There’s a thriving art gallery in La Union, and it is housed at the 3rd floor of LUPAC building, San Fernando City. The Culture & Art Gallery (Silid ti Adal ken Laing ti La Union) is open to tourists who wants to witness the artworks of budding local artists such as members of the Artists Guild of La Union (AGLUAN) that also trains young artists from different art groups.

How to get to La Union Culture and Arts Gallery:  From downtown San Fernando, ride a tricycle to take you to the arts gallery. Fare is about PHP 10 / USD 0.20 per person.

SAY A PRAYER AT MACHO TEMPLE

Proudly standing on top of a hill in San Fernando, La Union, the 7-storey Macho Temple is a Taoist Temple dedicated to Mazu, a Chinese sea-goddess.  It is said that its counterpart in Roman Catholic Religion in the Philippines is Our Lady of Casaysay in Taal Cathedral in Batangas. During the 5th-8th month of the Lunar Calendar, Mazu’s image is  transported to Taal for pilgrimage where a mass is held and then it is carried back to Macho Temple. Inside the confines of Macho Temple in San Fernando, visitors will find the golden emblem of the dragon, the Liang Thing Pagoda, the Majestic Five Door Gate, a Bamboo Garden and the Bell Tower and the Drum Tower.

VISIT BALAY NA BATO AND THE PEBBLE BEACH IN LUNA 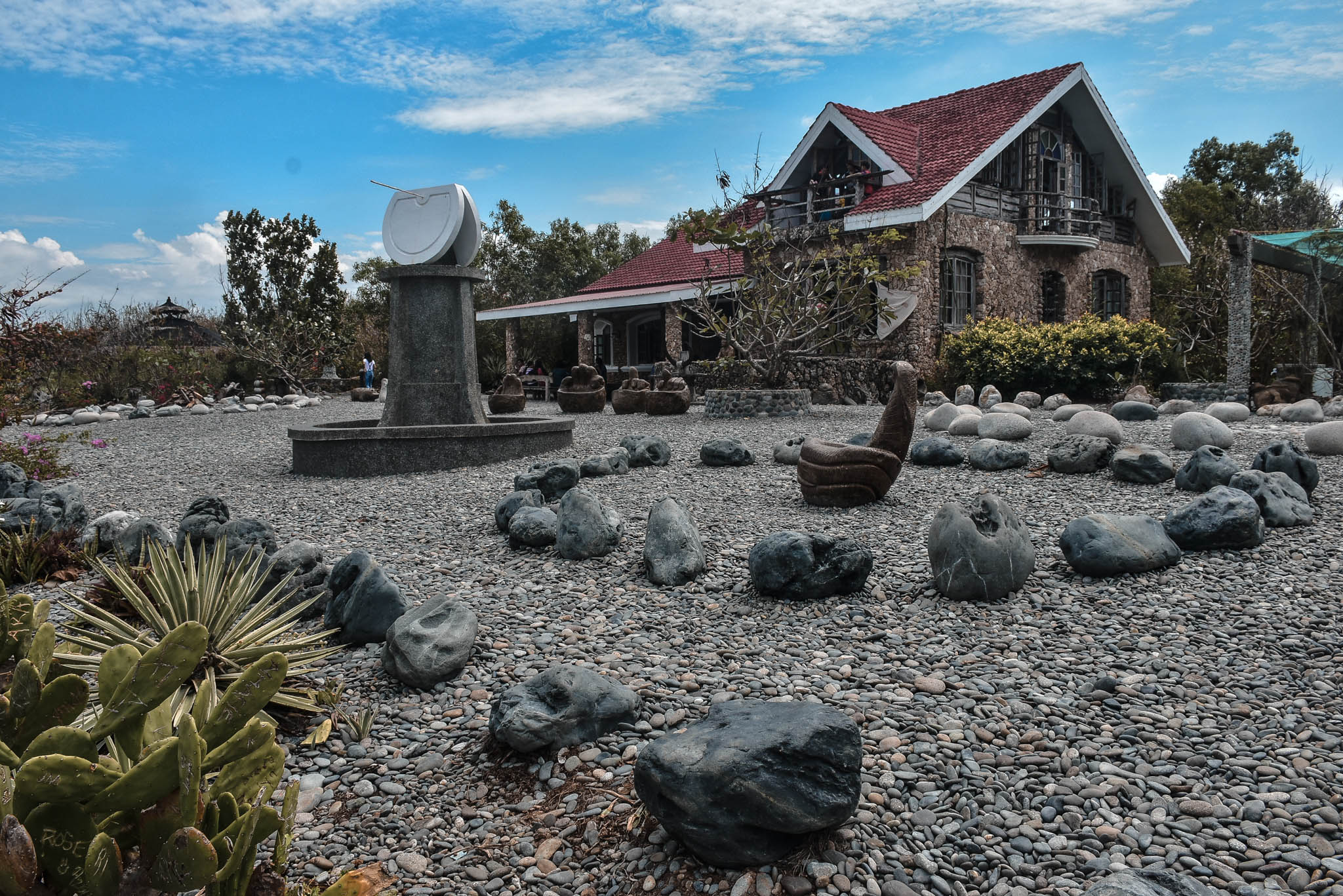 Luna, La Union is well-known for its pebble beaches and one of its popular tourist spots is the Bahay na Bato in Brgy. Nalvo Norte built from the stone and rocks found along its beaches. It is actually a rest house owned by Dr. Edison and Dr. Purita Chan-Noble.  What makes it interesting are the wood and stone sculptures created by Bong Kim, a Korean.  Inside the compound, one can also find a 3D House and a gallery where tourists can buy souvenirs such as local hand-weaved textiles.  The house sites beside a beautiful, natural pebble beach.  Swimming is not allowed but it is a good spot for photo op. 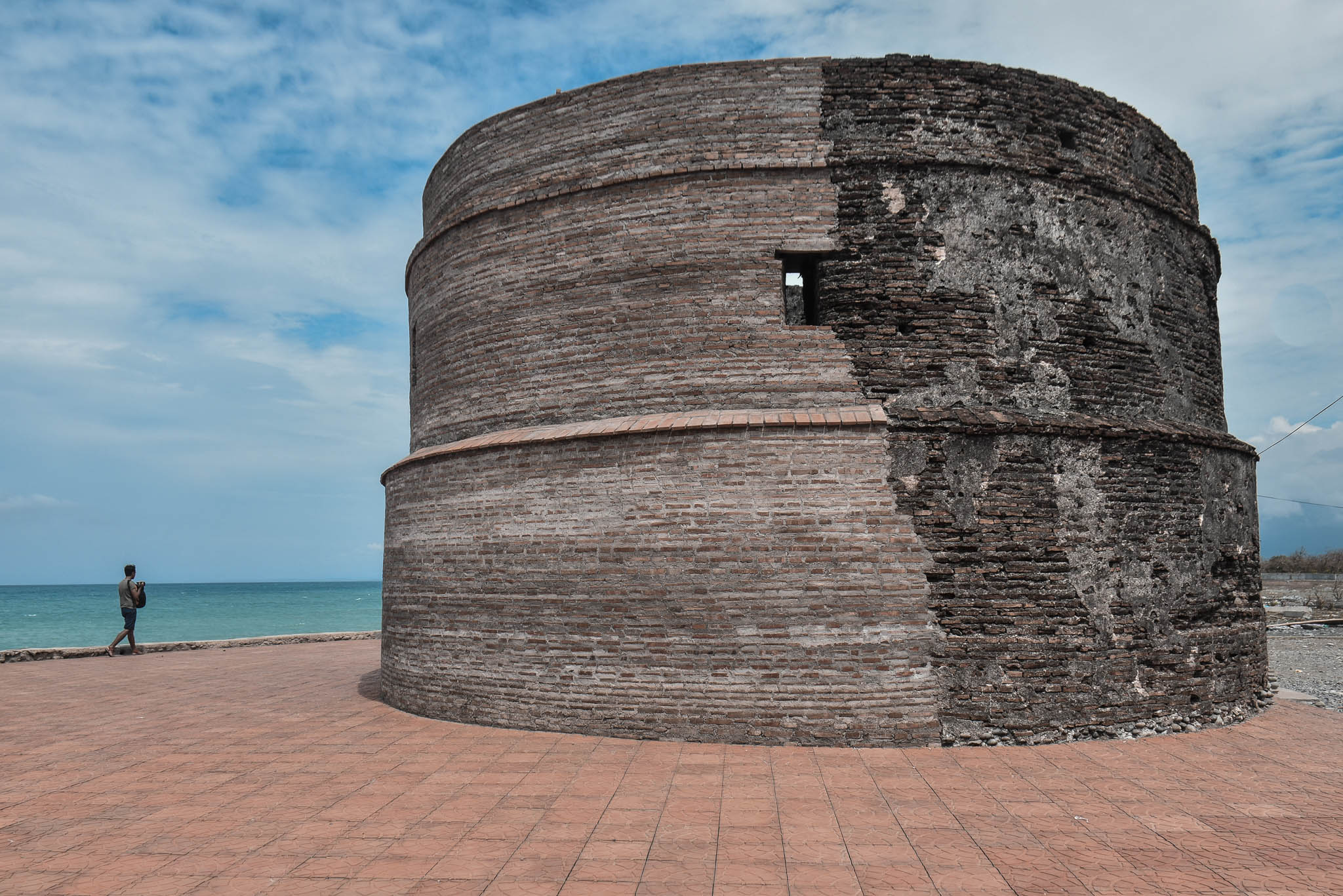 A few minutes away from Luna town center is the leaning Watch Tower of Luna, another top tourist spot in La Union. Situated in a pebble beach in Brgy. Victoria, the restored lookout tower was built during the Spanish era to warn residents of incoming pirates.

How to get to Luna’s Watch Tower: From downtown Luna, ride a tricycle to Luna’s watch tower.  Tricycle fare is about PHP 10 / USD 0.20 per person. You can also walk, it’ll take about 20 minutes from the town center. 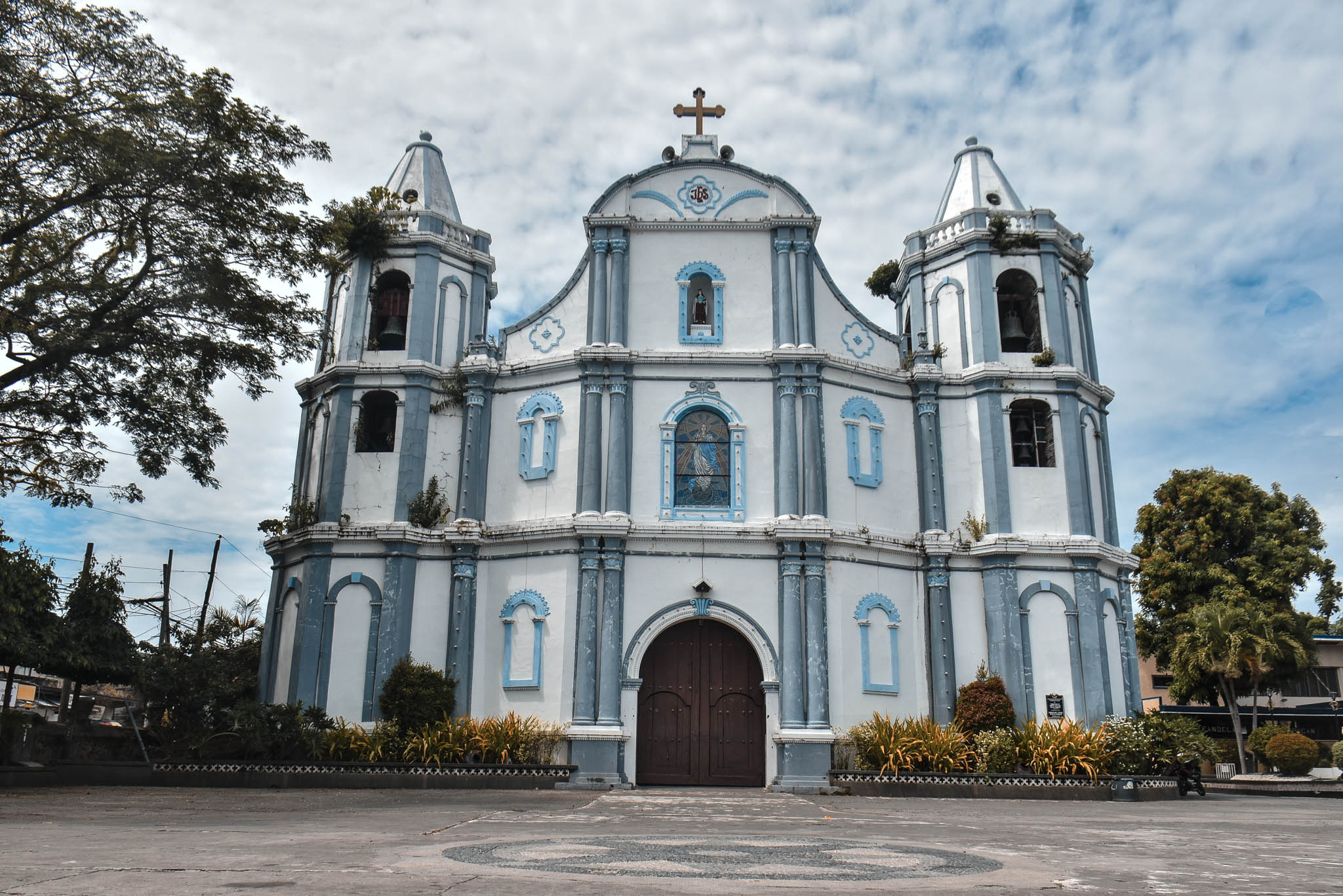 La Union is blissfully dappled with beautiful age-old churches including the Spanish-era Bacnotan Church (Saint Michael the Archangel Parish Church) in neoclassical architectural style.  While in the town of Luna, notice the imposing Namacpacan Church (Santa Catalina de Alexandria Church), a National Cultural Treasure and considered as an earthquake Baroque Church due to its thick walls and buttress.  There is a brick stair on its side that leads to the roof the church. Enshrined in Namacpacan Church is the image of Apo Baket, a highly revered image of the Blessed Virgin Mary believed to be miraculous.  Also, don’t miss the massive San Fernando Cathedral (Cathedral of St. William the Hermit) and the historical Pindangan Ruins both located in San Fernando, La Union.  Pindangan Ruins in Brgy. Parian is a remnant of an old stone church in Pindangan (now San Fernando).

WHERE TO STAY IN LA UNION