The ancient Ivatans drew comfort from a theory that the lava flow that devastated their fields and properties occasionally is also responsible for shaping up their province. Story has it, that all the 10 islands comprising Batanes were peaks in a gigantic underwater rim built up by lava flows from cracks in the ocean floor. These underwater volcanic activities millions of years ago, first fashioned Batan, the second largest island in the province composed of 4 municipalities. Its capital – Basco, blissfully situated in the north is crowned by Mt.Iraya. Thankfully, this forest-clad stratovolcano has been inactive for years; in fact, its last recorded eruption was way back in 1454. 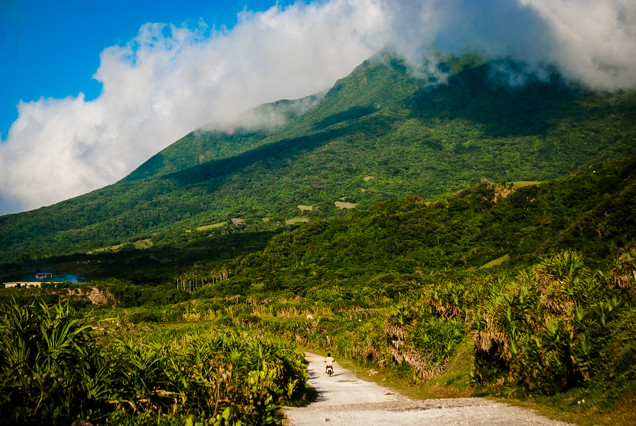 Batanes has been dropping-jaw for years. For first timers, getting acquainted with the province starts with exploring Batan Island, which is divided into North and South Batan Tour. North Batan Tour mostly covers the attractions in Basco, which serves as a prologue to what the province has to offer.

Here are the top attractions to visit in North Batan Island:

On my recent trip to Batanes , I explored North Batan by bike and a private tour through BISUMI Tour, owned by a former local tour guide Ryan Cardona. Though biking seems idyllic because of the island’s scenic countryside, I wont recommend it for your Batan Island Tour (unless you are adventurous or a hardcore biker) if you have limited time, and an unreliable bike. Most parts are undulating, thus, ascending can be pretty challenging. 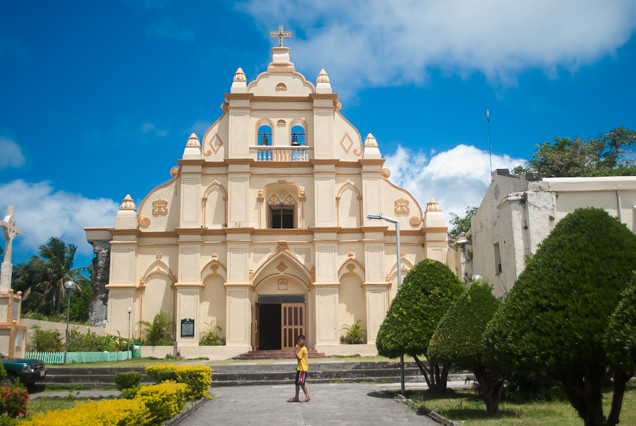 But if you are staying in Basco town proper, getting around by bike is a good idea if you wish to see places such as the 18th century St. Dominic Cathedral (Basco Cathedral). This daffodil-painted church is the first Catholic Church in Basco.

Another worthy stop-over is the colorful Yaru Gallery and Art Shop, the first of its kind in Batanes. This neck-swiveling shop is run by a cooperative of Ivatan artists. They aim to help make the arts an eco-friendly industry for sustainable livelihood that supports the indigenous culture and heritage of Batanes. 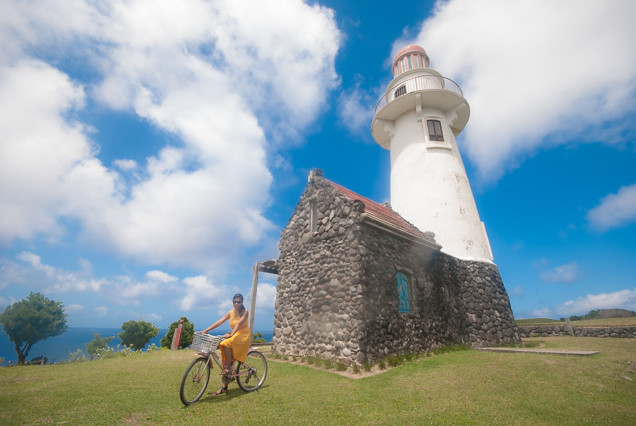 Proudly standing on the location where the first lonely sentinel was built, Basco Lighthouse towers over Naidi Hills like an ancient god. This 6-storey edifice noted for its rubblework offers a breath-snatching vista of Batan Island and Vayang Rolling Hills plunging into the cerulean West Philippine Sea. 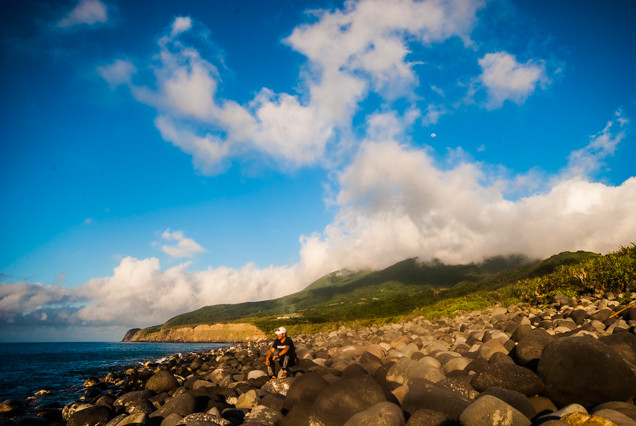 Valugan and Chadpidan Beach unique boulder-fringed shores summon tourists. These mammoths are actually andesite rocks (smoothened by ceaseless waves buffeting the shore) ejected by Mt.Iraya during its devastating flare-up in the olden days.

Going further from the boulder beaches, you will encounter the forgotten Nakamaya Burial Grounds which has a great tradition to tell. This is the final resting place of the Ivatans, who firmly believe in life after death. Like the ancient burial grounds found in Itbayat, the boat-shaped grave markers here face the sea.

In Batanes, sites of archeological importance are dappled everywhere; some of them have sadly been forgotten such as Basco Idjang and Chadpidan Idjang on Songsong Bay. These mountain fortresses were used by the early Ivatans as centers of communal life and provided a place of refuge in the horrifying days of raids. It’s been said that the early inhabitants here took advantage of these pre-existing topographies and enhanced and fashioned them into dwelling places. The only way the intruders can get to them is by climbing through ladders lowered from above. That is why these places were perfect defenses during battles. 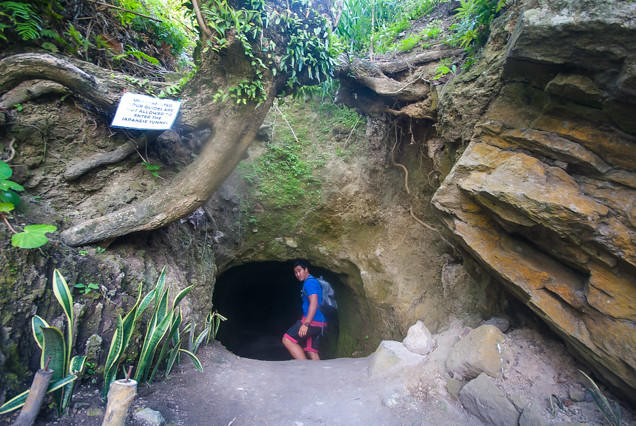 Nestled on Tukon Hills, is another historic site – the Dipnaysupuan Japanese Tunnel. This 5-door channel was built by the Japanese soldiers during World War II. 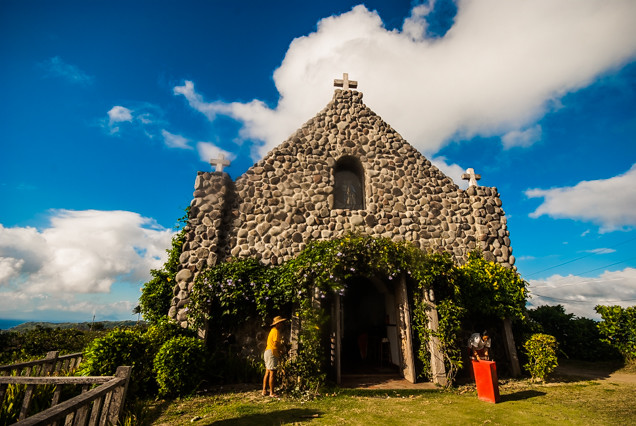 While in Tukon Hills, don’t miss the majestic Mt. Carmel Chapel (also Tukon Church) noted for its rubble masonry. It is owned and built by Abad Family, Batanes’ most influential family. Interestingly, its ceiling is hand-painted with images of Batanes’ patron saints.

Near the posh Fundacion Pacita, a posh boutique hotel associated with Pacita Abad, an Ivatan painter recognized for her colorful trapunto pieces. If staying here will break your wallet, try to at least dine here once, call and reserve ahead of time as preparing the food can take awhile.

While in the area, don’t go home without visiting this helpful structure which offers a neck-swiveling view of Mt.Iraya, the surrounding azure bay and the iconic rolling hills punctuated by hedgerows – the Pag-asa Weather Station!

Unquestionably, North Batan is a place of natural beauty enhanced by man, from the verdurous rolling hills dappled with cows and goats, to the azure sea that hurls itself perpetually against a ruggedly enchanting coast. All of them take part in creating an opus of splendor in this beautiful island. 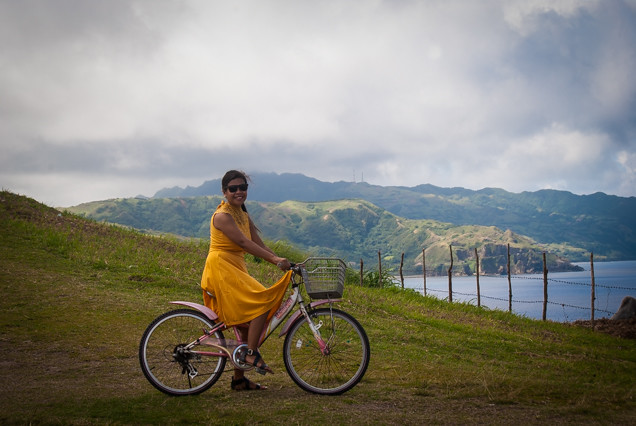 How to get to Batanes:

Philippines Airlines  flies from Manila to Basco and vice versa.  Book your Batanes flight at http://www.philippineairlines.com.

Where to Stay in Basco, Batanes:

For the best and affordable Batanes tour package, I highly recommend,