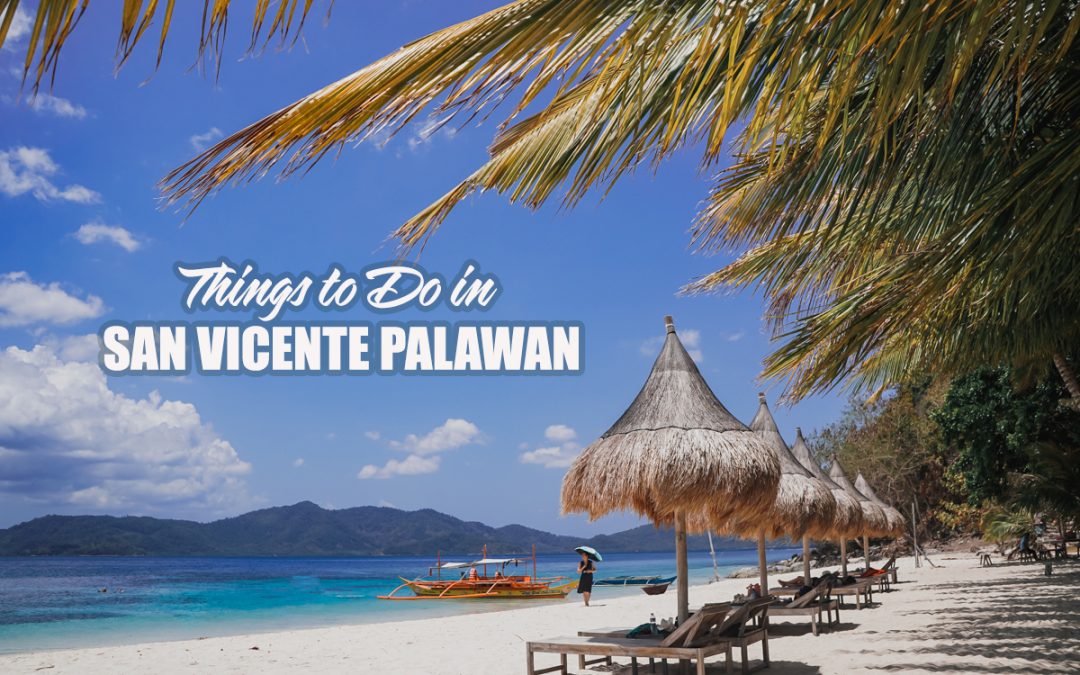 WHAT TO DO IN SAN VICENTE PALAWAN

San Vicente Palawan is a rising tourist destination in the Philippines.  It is located in north-western Palawan. Despite its popularity, it still exhibits a laid-back charm. Most of the tourist spots in San Vicente are picturesque beaches – it is home to the popular Long Beach, which is actually composed of 3 beaches. Here, you can enjoy a tranquil beach break on its palm-fringed shore.

WHAT TO DO IN SAN VICENTE PALAWAN

Dubbed as the “Longest White Beach in the Philippines”, measuring roughly 14 kilometers.  Long Beach in San Vicente, Palawan is not actually a single strip of beach but is composed of the southern beaches of Pinagmangalokan (in Brgy.New Agutaya), Enarayan (in Brgy.San Isidro), and Alimanguan (Brgy.Alimanguan) that are interrupted by rock formations and grassy hills. 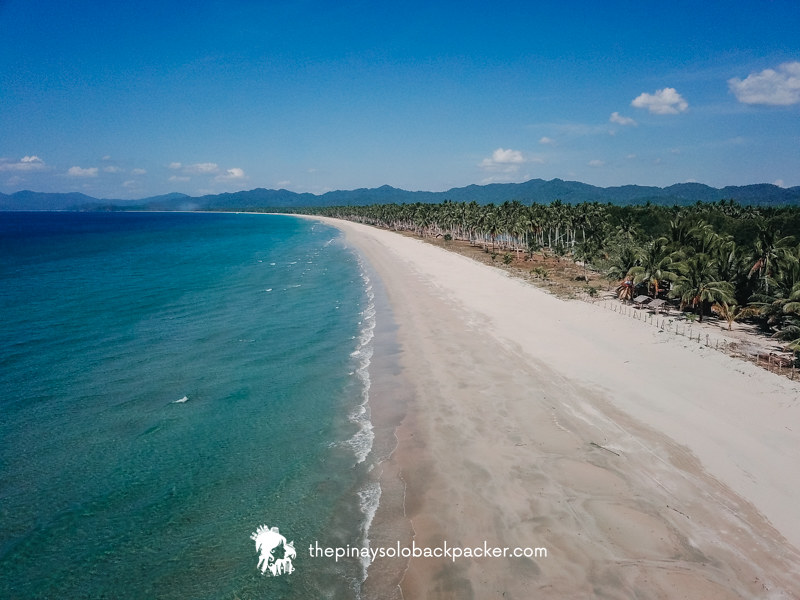 Also, Long Beach is not really white, it has cream shore fringed by coconut trees and lapped by denim blue sea.  We stayed at Pinagmangalokan Beach in Brgy.New Agutaya (part of Long Beach), during our recent San Vicente and Port Barton trip. It’s a good base as you can enjoy a quiet beach not crowded by tourists and touts. The only downside is, there’s not a lot of restaurant options.Long Beach can be explored by hiring a motorcycle (habal-habal) with driver (good for 2 persons).

How to get to Long Beach San Vicente, Palawan:

If coming from San Vicente Palawan Airport, Long Beach, you can hire a tricycle to take you to Long Beach. Travel time is roughly 10-15 minutes. Rate is PHP 70 per person if you will wait for other passengers or ₱250 ($5 -€4) – ₱300 ($6 – €5) if you want to charter the tricycle (good for 3-4 persons). Rates will vary depending on the beach that you will visit.

If coming from San Jose Terminal (Puerto Princesa) by van, you can ask the driver to drop you off at Long Beach in San Vicente, Palawan.

If coming from San Vicente town proper, take a tricycle for about ₱50 ($1 – €1)(starting rate) per person. Rates vary depending on the beach that you will visit.

Most of the tourist spots in San Vicente are beaches.  The once sleepy  town is dappled with cream sand beaches, many of them make up the famous Long Beach.  You can actually explore the beaches by renting a motorbike or hiring a motorbike with driver (good for 2 persons).  Some of the beaches you can explore are: Pinagmangalokan Beach, Enarayan Beach, Bokbok Beach, Tagpis Beach, Alimanguan Beach, Nagtulay Beach, Boong Beach, Erawan Beach, and Ombo Beach. 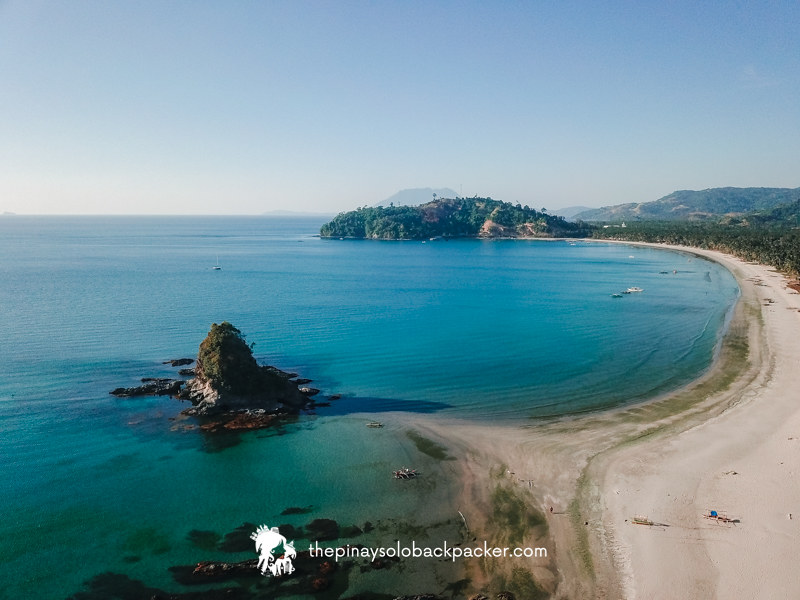 What we did in San Vicente was hire a motorbike with driver, and from Pinagmangalokan Beach, we visited Alimanguan Beach and watched the sunrise at Bato ni Ningning, a viewing deck overlooking Erawan Beach. Rate is ₱1,000  ($19 – €17) (good for 2 persons), roundtrip.  You may also rent a motorcycle for ₱500  ($10 – €8) (excluding gas) per day.

Bato ni Ningning got its name from the now defunct ABS-CBN TV Show “Ningning”.  The TV show aired way back in 2015 was shot at this location. But even long before the TV series, this place is already a known San Vicente tourist spot for viewing Erawan Beach (also Irawan Beach). Because of its rising popularity, the local tourism office built a viewing deck here. Which is more like a hut where tourists can rest or hide from the sun or rain. They also now collect a minimal fee for the upkeep of Bato ni Ningning. 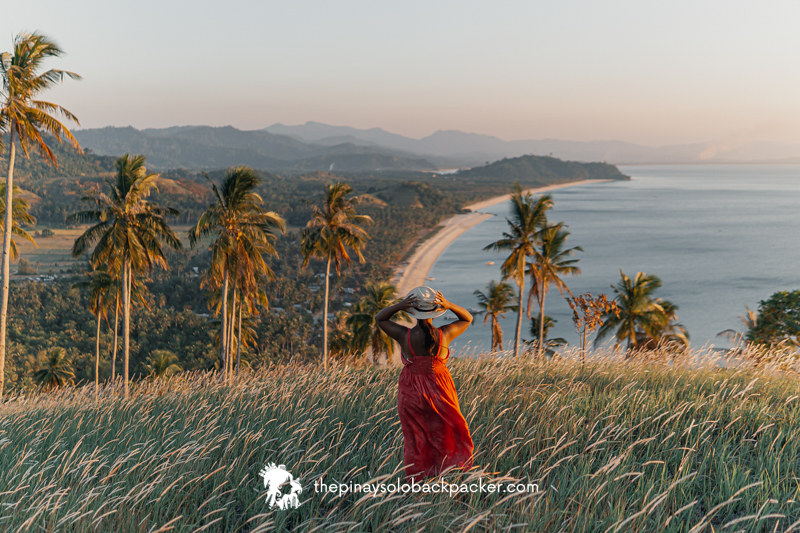 Bato ni Ningning offers a 360 degree view of its surroundings – you can see Irawan Beach from here, the rice fields, and the surroundings mountains. It’s one of our favorite tourist spots in San Vicente Palawan especially during sunset.

How to get to Bato ni Ningning:

Rent a motorcycle for PHP 500 (excluding gas) per day 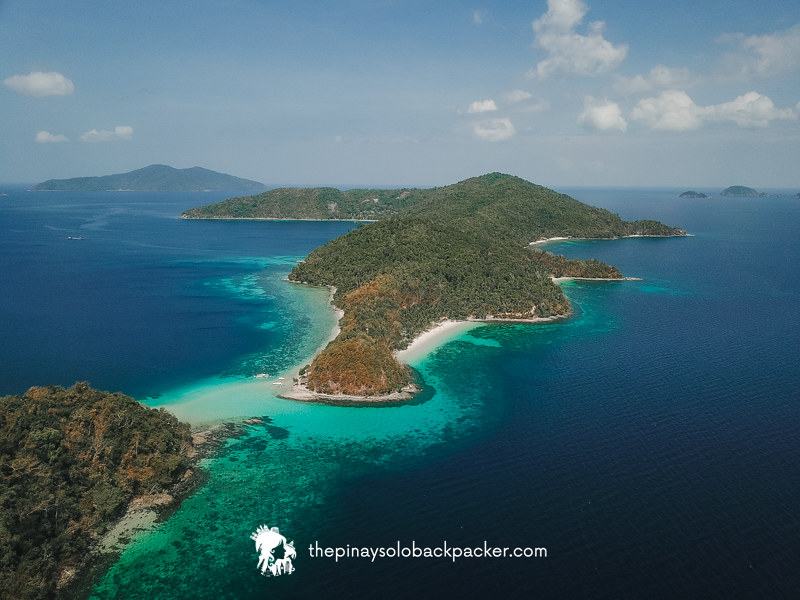 A must when doing the island hopping tour in Port Barton is snorkeling at Twin Reef.  I didn’t expect it when I swam into the water, I was really surprised  because the corals here are gigantic and there a variety of colorful fishes!  The spot is somewhere in the sea of Port Barton and you don’t have to dive deep to witness its beauty! It’s pretty shallow so be extra careful, avoid stepping or touching the corals.

6.Swim with the Sea Turtles 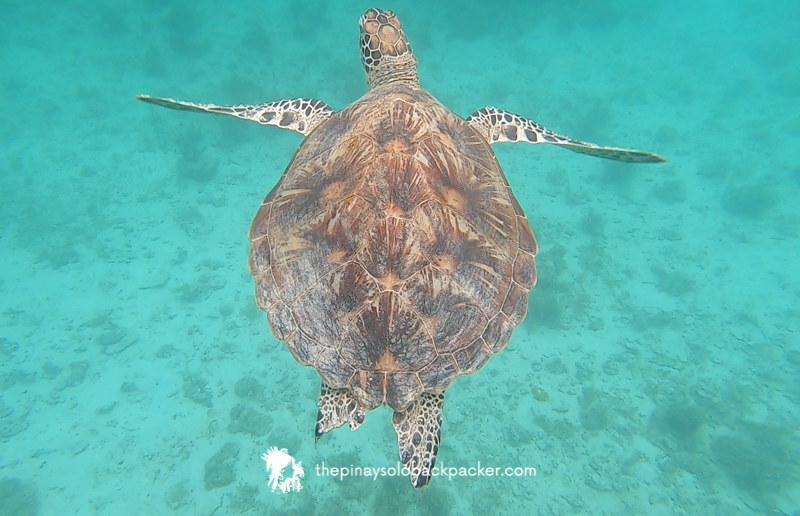 If you are lucky enough, you might spot a pawikan (sea turtle) while swimming in one of the islands in Port Barton.  Because of its pristine and somewhat protected environment, San Vicente is one of the best places to spot sea turtles like the green sea turtle and the hawks bill. There’s a turtle sanctuary near Turtle Island and it is said that the peak sea turtle nesting period lasts from October to March.  During our visit, one of the beach resorts in San Vicente released a couple of sea turtles to the sea.

7.Get Wet at Pamuayan Falls 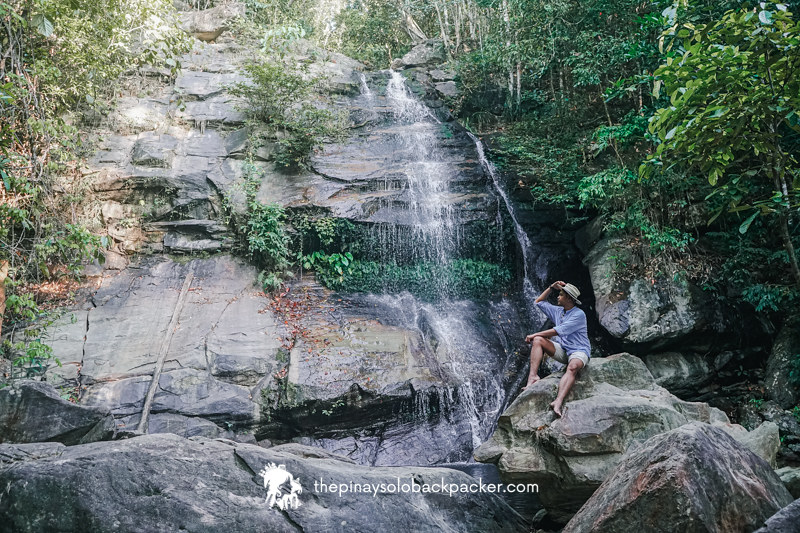 How to get to Pamuayan Falls

Since our beach resort in San Vicente (Turublien Beach) is located across Inandeng River, we took the opportunity to go kayaking here.  Inandeng River’s water is calm and it is fringed by coconut trees, so it was really a picturesque tourist spot.

We learned from the beach resort owner that there’s a Mangrove Forest Tour in San Vicente. But since the mangrove forest is also near the resort and can be accessed by kayaking at Inandeng River if it’s high tide, we gave it a shot.  It was pretty silent, we can only hear the insects, so we were quite scared and hesitant at first because it looks like a haven of crocodiles.  Marcos wanted to back out already but the mangrove forest is so picturesque, so I persuaded him.  And glad that we did because it’s not really as scary as it looks. It’s also a great photo op spot!

How to get to San Vicente Mangrove Forest:

3.Kayak to the Mangrove Forest via the Inandeng River. Do note that this is possible only during high tide.

*You may also inquire at the San Vicente Municipal Tourism Office to arrange a guided Mangrove Forest tour. 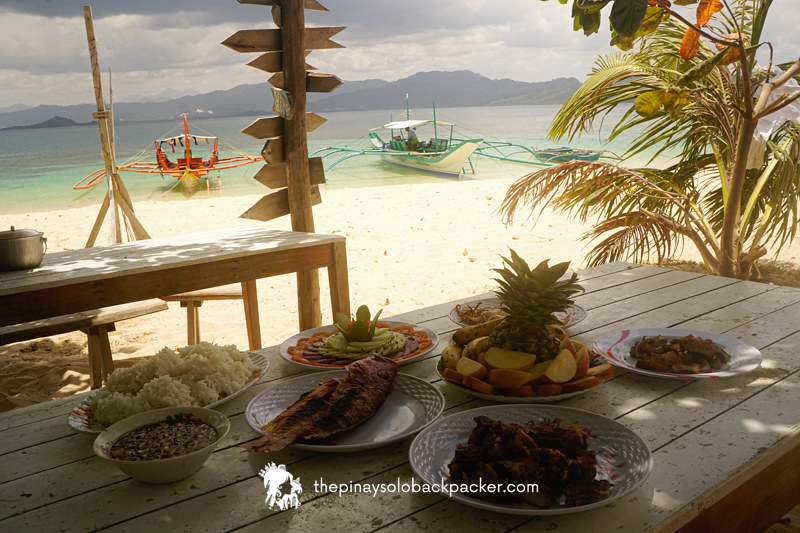 While there’s no  fancy seafood restaurants in San Vicente, fishing is the main source of livelihood here. Many of the seafood caught here are being transported and sold in the neighbouring towns, like Roxas and El Nido.  But during your island hopping tour in Port Barton, seafood lunch will most likely be included. You may also try boodle fight where the meal that includes rice, crab, fish, squid, shrimps, mussels, and pork are served on banana spread out on the table.  We had seafood lunch during our island hopping tour, prepared by our boatmen.

Refer to the  San Vicente Palawan tourist map below to help you plan your travel itinerary.

How to get to San Vicente, Palawan

1.From Manila, Skyjet flies to San Vicente Airport during Monday, Tuesday, Wednesday, Friday, and Sunday. Travel time is about 1 hour.

1.From Clark, Pampanga, Philippine Airlines has daily flights to San Vicente. Travel time is about 1hour and 40 mins.

3.You can alight at the town proper or ask the driver to drop you off at your resort (for an additional fee). 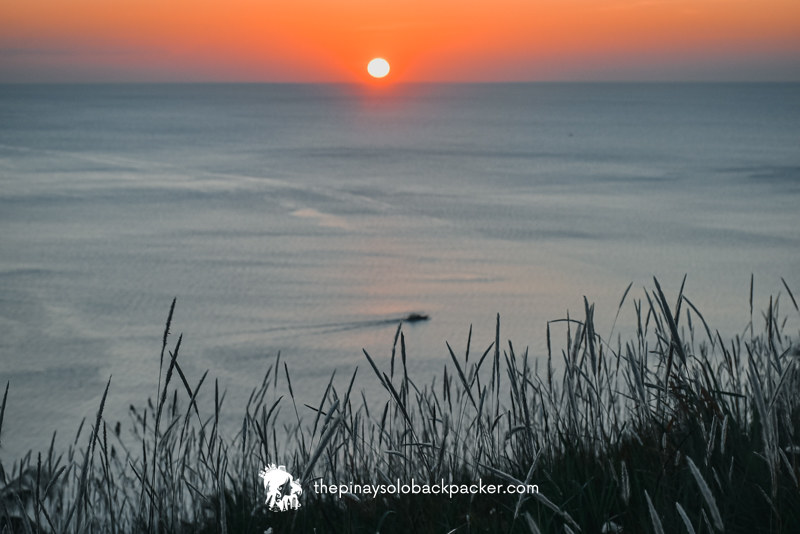 Where to Stay in San Vicente Palawan

If you plan to stay in San Vicente, it’s best to find a beach resort  near Long Beach. Here’s a list of some of the top rated San Vicente Palawan beach resort and hotels.

If you want to see the main beach strip and stay there,  Turublien Long Beach Inn and Beach Bar at Pinagmangalokan Beach (Long Beach) is a good option, it’s not a luxury resort, but a 3-star accommodation that’s perfect for budget travelers.  We found out about this place from our good friend Gabz of Pinoy Travel Freak.  You have to cross the river using a make-shift raft that will be pulled by the staff of the inn on the other side. 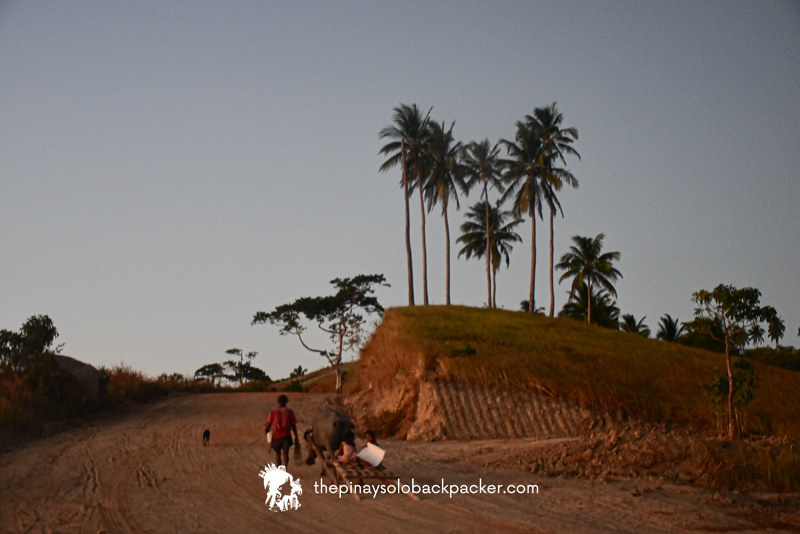