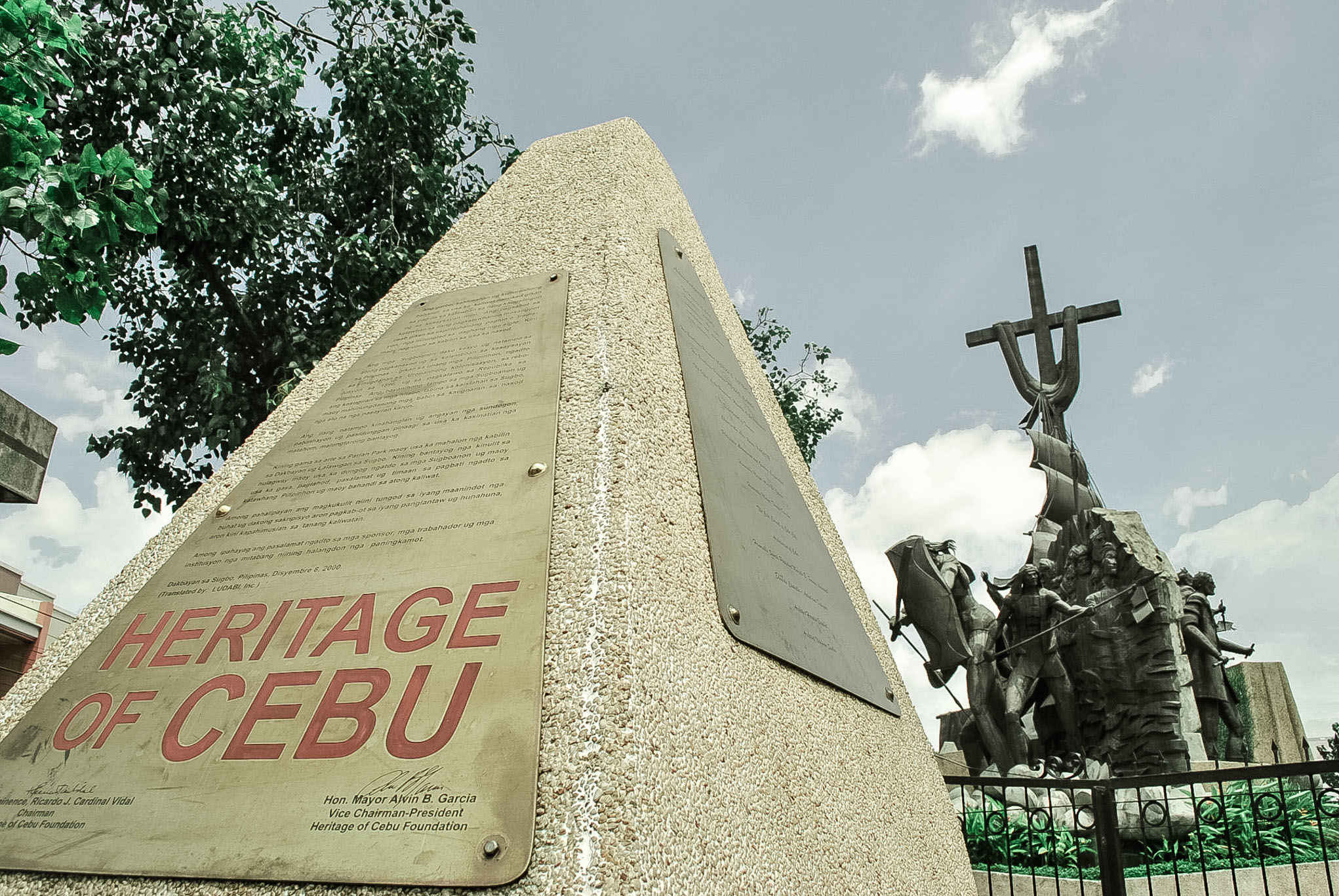 Dubbed as “The Queen City of the South”, the lovely Cebu City, the oldest city in the Philippines is bursting with rich cultural heritage through its old colonial buildings, archaic churches and interesting museums.  To experience the old vibe of this lively city, head to the Old Cebu quarter in downtown Cebu and do a walking tour: 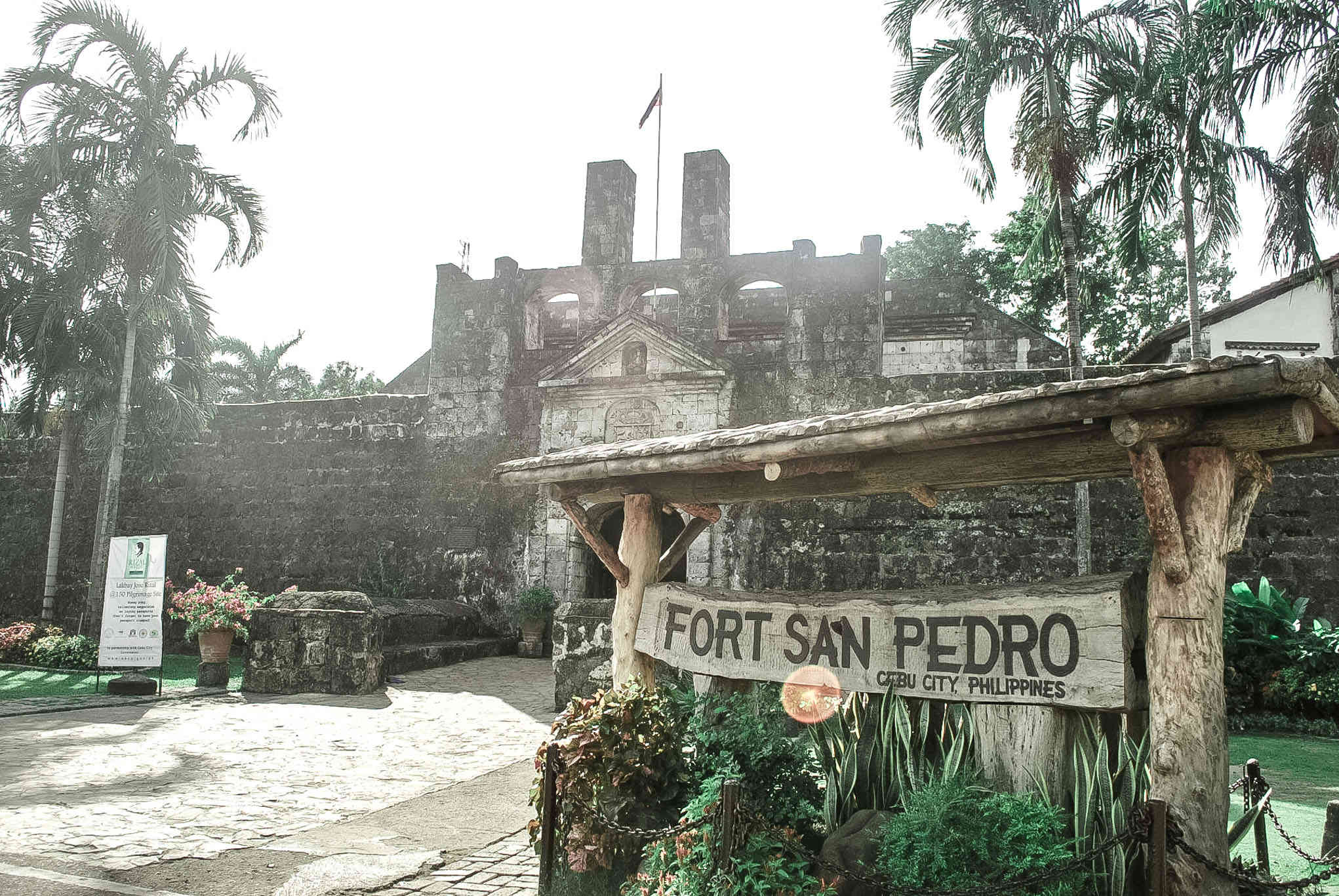 I started my  old Cebu Walking tour in Fort San Pedro, standing near the shoreline of downtown Cebu.  To get here, I took a cab from my hotel because I don’t know how to reach the area by public vehicle. This well-preserved fort is uniquely-shaped – triangular, unlike most rectangular bastions in the country and it is fringed by 14 cannons.  Fort San Pedro takes pride for housing the first Spanish community in the Philippines – the Villa de San Miguel de Cebu that was renamed as Villa Del Santisimo Nombre de Jesus later on. Fort San Pedro is the smallest and the oldest fort in the Philippines, its construction began in 1565 under the command of the Spanish colonizers.  But if it weren’t for the great local Cebuano laborers back in the days, this mighty fort would not have existed.

How to get to Fort San Pedro by Jeep (Commute)

From Fort San Pedro, walk to the main road and turn left and follow the street that turns into Cebu City’s oldest and biggest produce market – the legendary Carbon Market.  Like the typical markets in the Philippines, Carbon Market is flanked by fresh produce, handicrafts, souvenirs, dried fish and intestines and even live poultry for sale.  Interestingly, its name is derived from the depository of coals back in the days that were used to run the old steam train nearby. 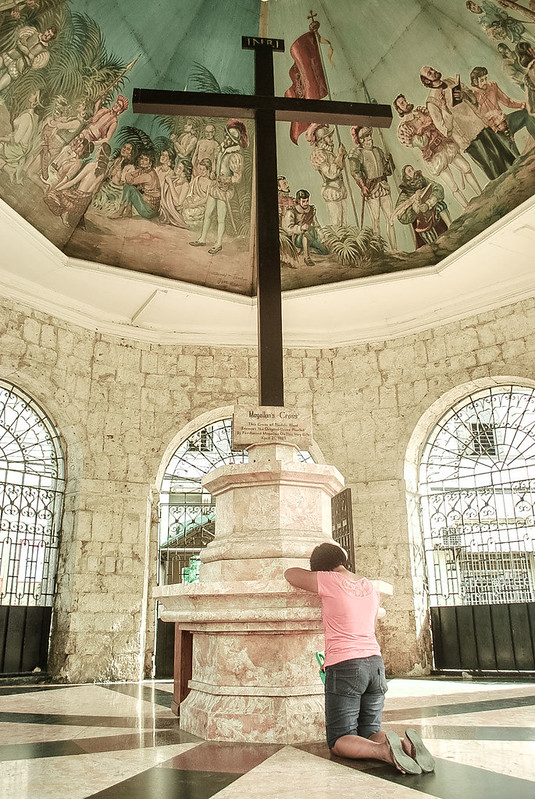 From Fort San Pedro, you can walk to the main road and just cross the street to see the iconic Magellan’s Cross, the top tourist attraction of Cebu.  The colossal cross is encased inside a wooden cross and enshrined in a chapel just standing beside the Basilica Minore Del Santo Niño.  According to the inscription on the plaque, it is the original cross used by Ferdinand Magellan, the well-known Spanish colonizer. 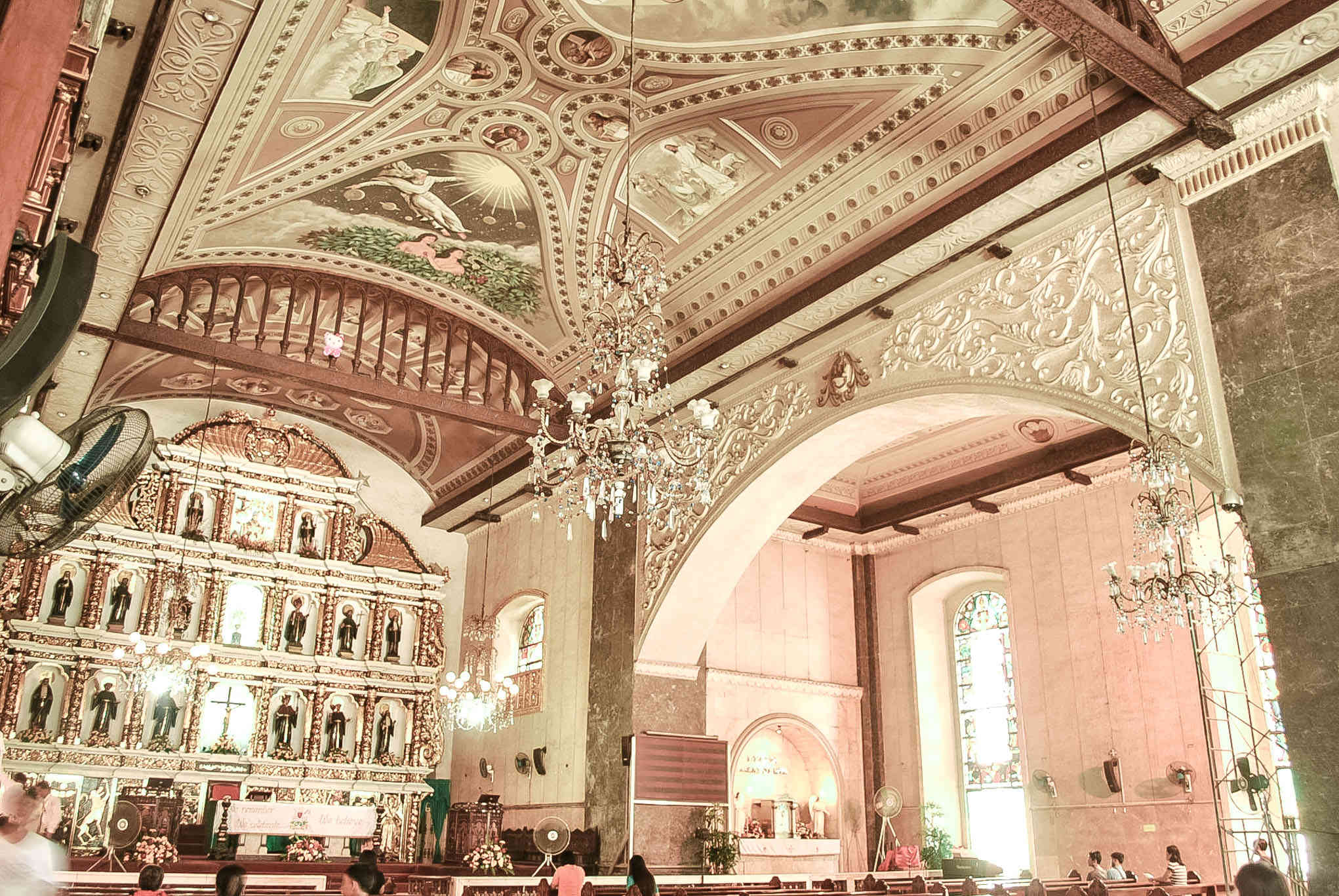 From Magellan’s Cross, look for the crowded gate (just a few steps away) that leads to the Basilica Minore Del Santo Niño, the famed church of Cebu.  You can light a candle and offer a prayer at the Prayer and Candle Court.

Enshrined inside the Basilica Minore Del Santo Niño is the oldest image of Santo Niño (The Child Jesus) used for Cebu’s grandest festivity – Sinulog Festival.  The Santo Niño image is believed to be a birthday gift of Ferdinand Magellan to Queen Juana, the wife of Rajah Humabon, back in 1521. Basilica Minore Del Santo Niño’s  façade may look ordinary, but go inside and you’ll be surprised by its lavish interior.  Marvel at the artistic ceiling hemmed by religious murals also not to miss is its charming courtyard. Here you’ll find an archaic fountain fringed by a garden and you can also line up nearby to see the oldest image of Santo Niño. 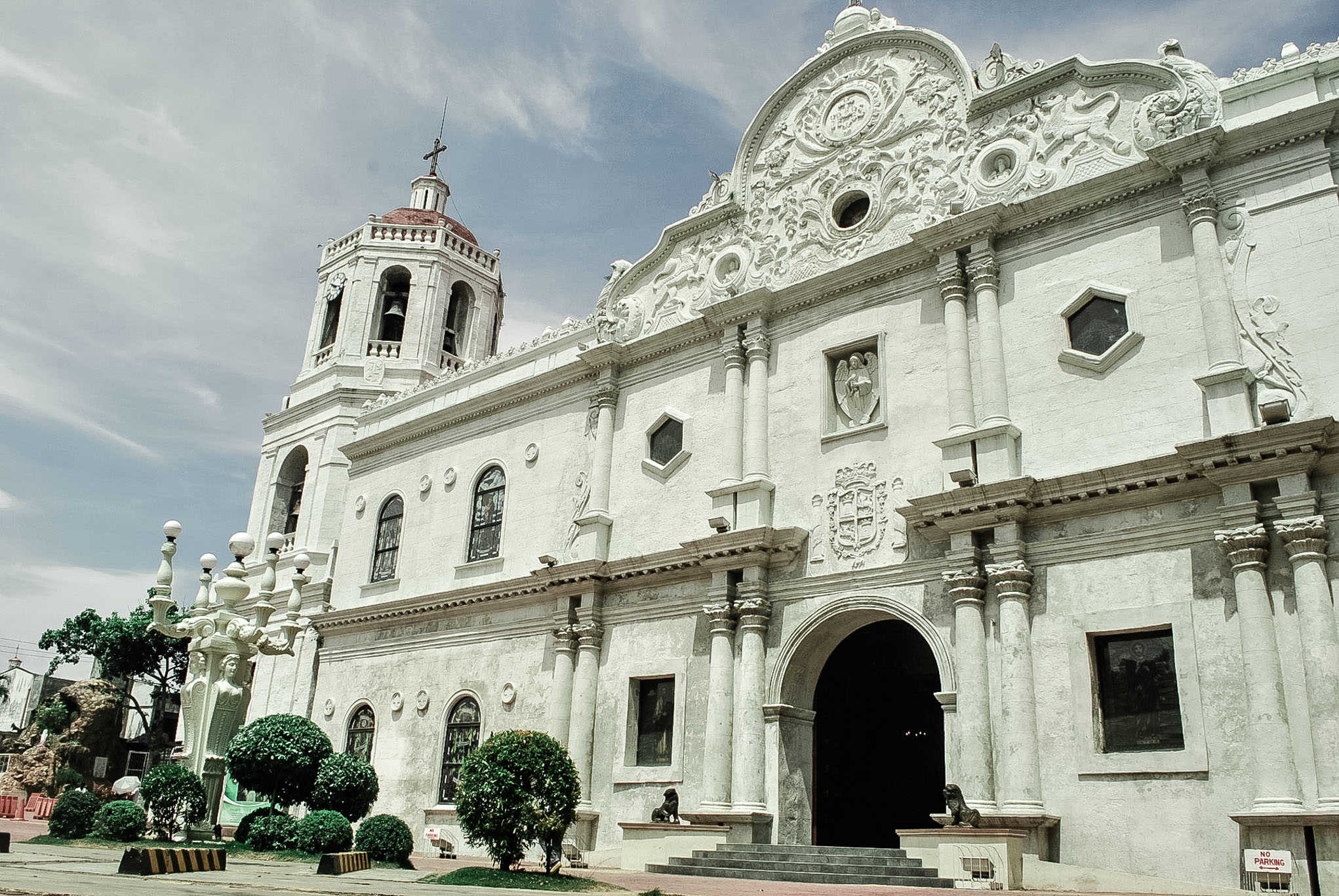 From Basilica Minore Del Santo Niño just cross the small street (near Jollibee) that is crowded by street vendors and walk further until you reach a massive white church. The Cebu Metropolitan Cathedral, the Archdiocese of Cebu, is tucked in the tranquil side of Old Cebu.  You can also take a peek at the Mausoleum situated at the back of Cebu Metropolitan Cathedral where the remains of the Catholic bishops are buried. 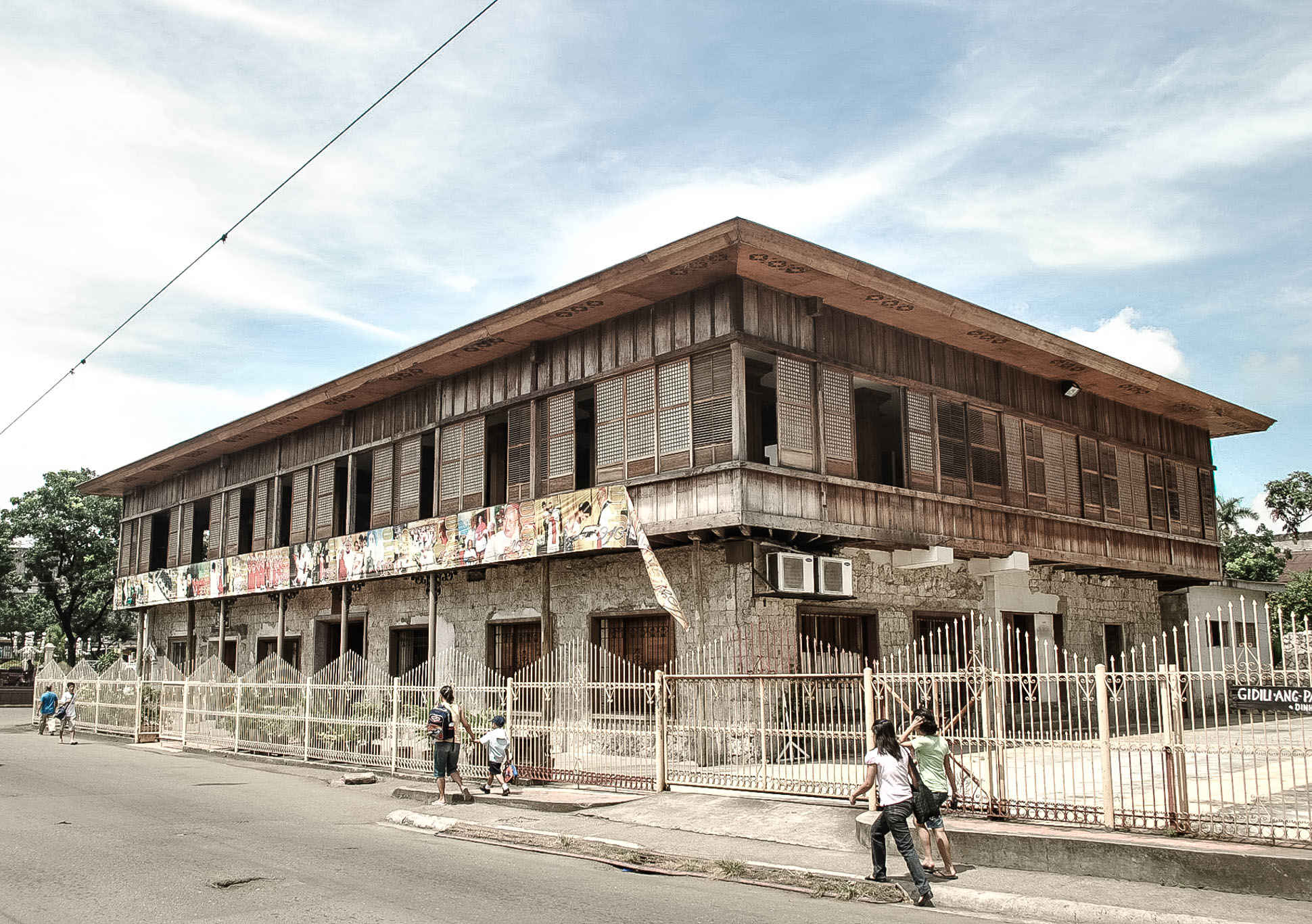 Walk outside the walled garden in front of the Cebu Metropolitan Cathedral and notice a well-preserved Bahay na Bato painted in Brown.  This old colonial house is the Cathedral Museum of Cebu where a collection of priest vest, chalices and statues of varied saints are enshrined. 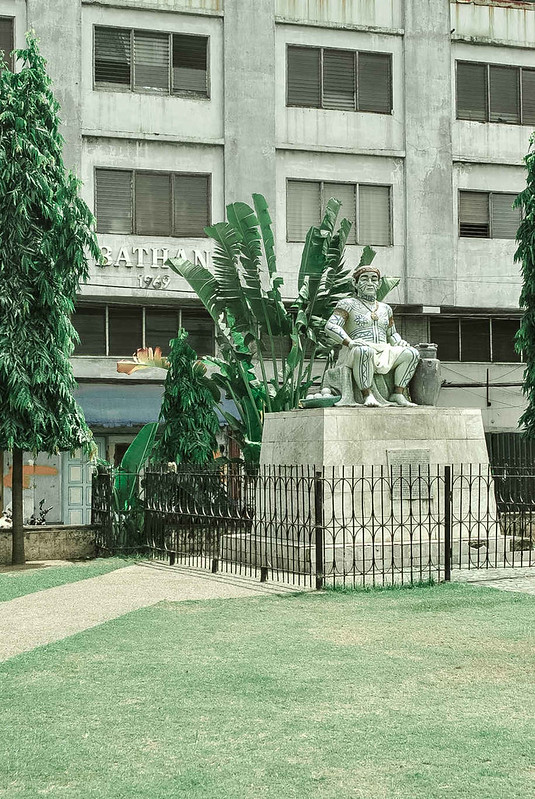 Barely noticeable is the statue of Rajah Humabon, standing in a modest park clad by grasses, just across the Cathedral Museum of Cebu. I just find it sad that Rajah Humabon’s Monument, the highly respected chieftain of the indigenous inhabitants of Cebu seems forgotten.  His statue is sporting a turban, tribal ornaments, and a loin cloth.  His face is painted, and his chest, legs and shoulders are inked with tribal tattoos. Rajah Humabon was the first among the original settlers of Cebu who first embraced Christianity when Ferdinand Magellan and his Spanish comrades arrived in the Philippines. Before the Spanish invasion, the indigenous Cebuanos were involved in the South East Asian maritime trade with Chinese traders as well as East Indian and Siamese. 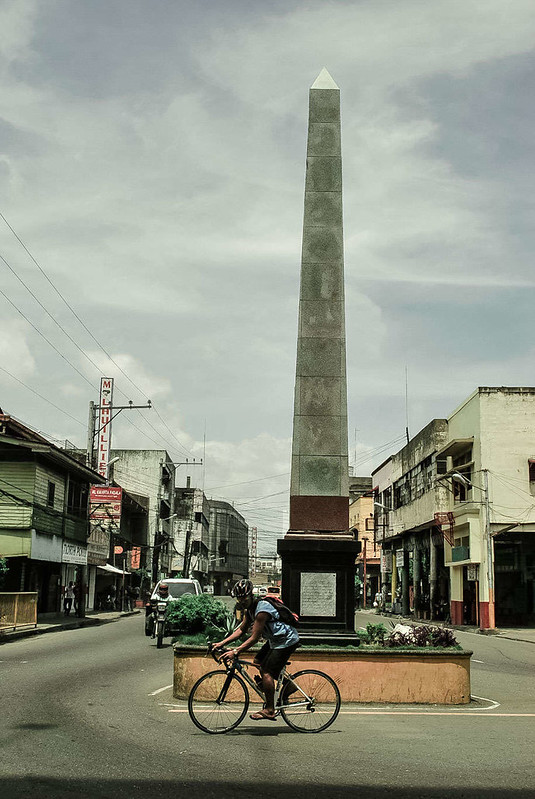 Continue walking past Rajah Humabon’s Monument until you see an obelisk. The legendary Parian, or commonly known as Colon Street derived its name from the explorer Cristobal Colo (Christopher Colon). It is actually the oldest street in the country that was built by the Spanish colonizers and it is easy to spot because of the obelisk. 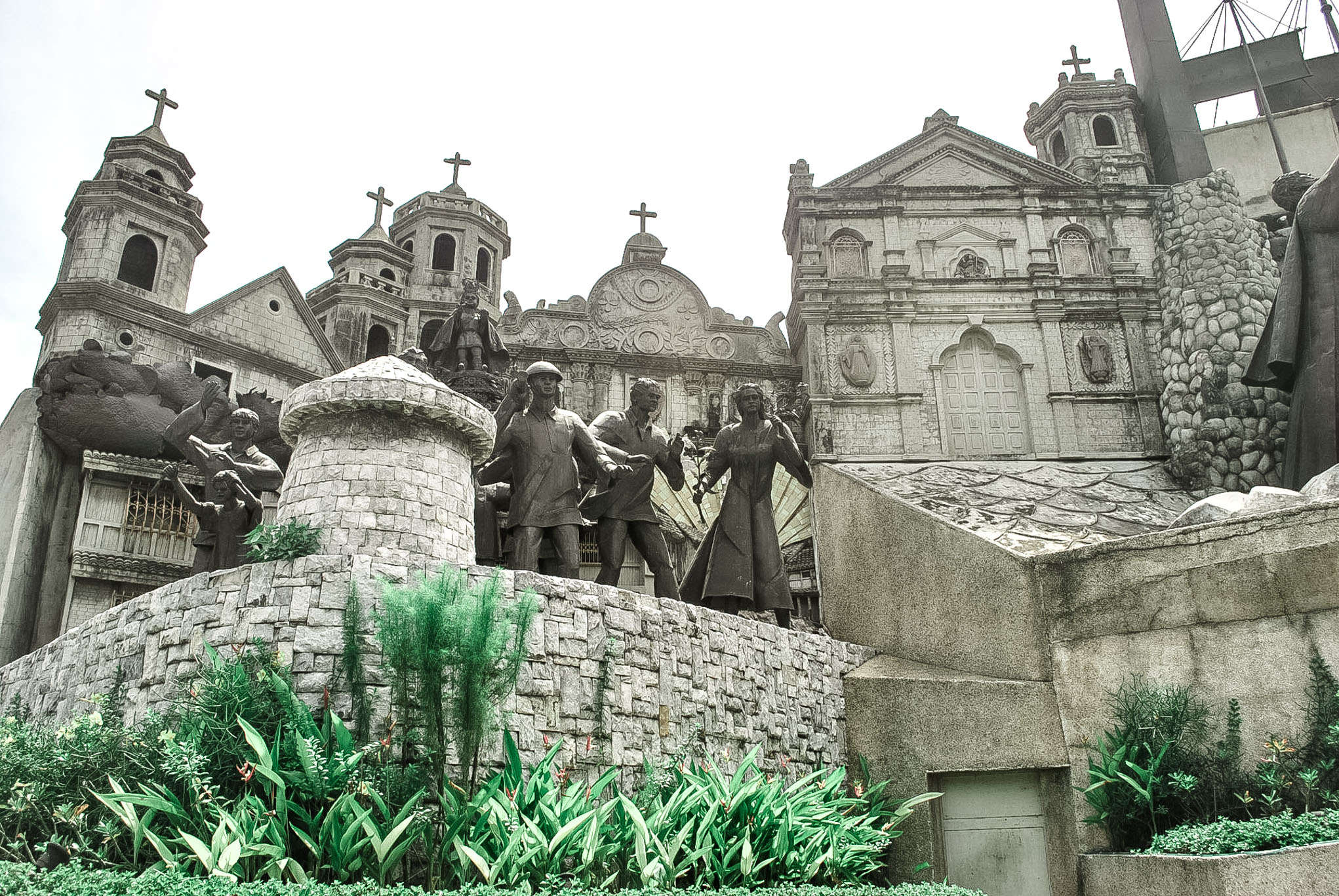 Walk further in Colon Street and you’ll find The Heritage of Cebu Monument, a massive sculpture showcasing the history of Cebu.  The evocative monument created by Edgardo Castrillo proudly stands at the heart of the Old Parian district. It is said that back in the days, Parian is the place where the wealthy Filipino businessmen and Chinese merchants reside. 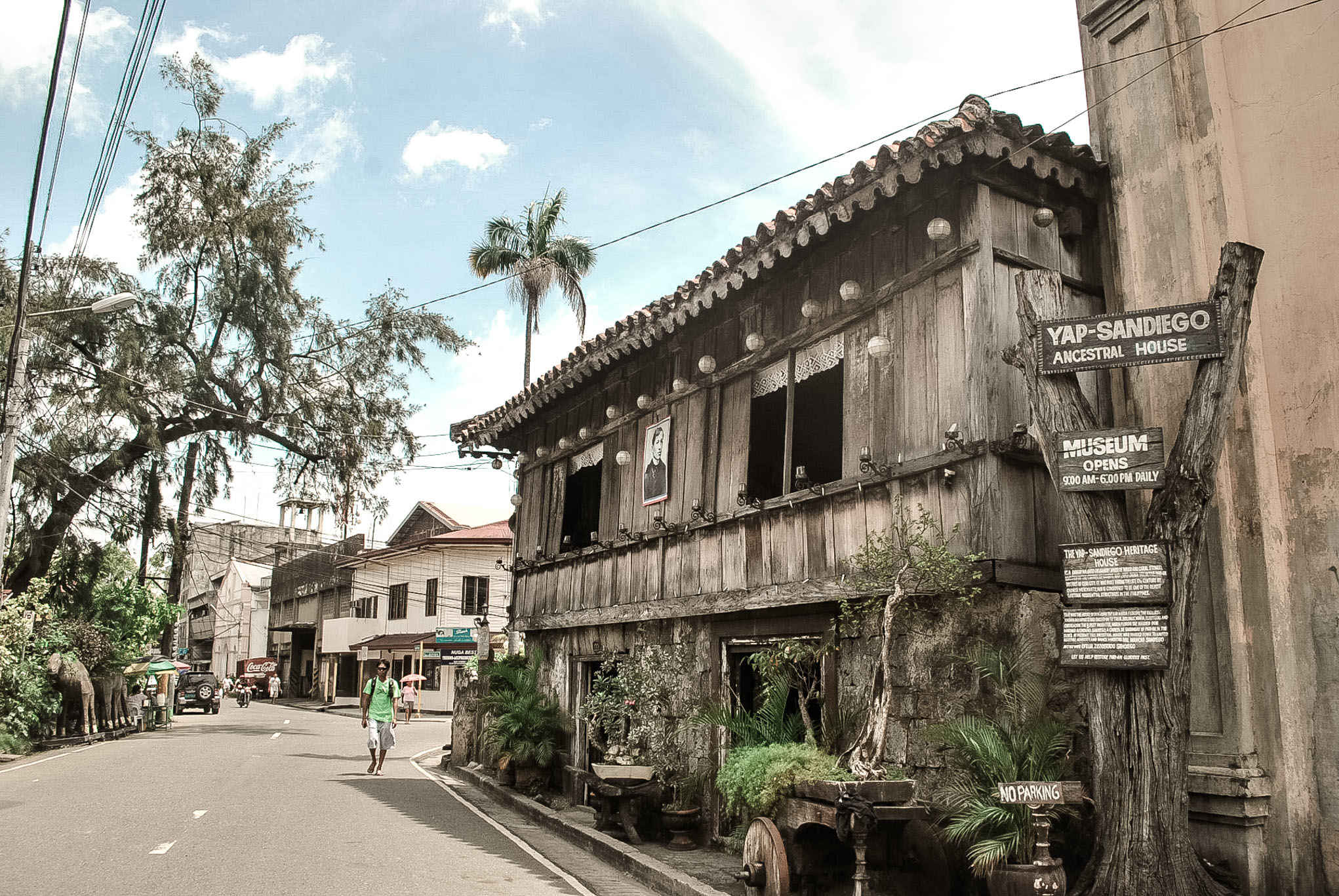 My personal favorite is Yap-San Diego Ancestral House, an old house built out of coral stones and hardwood, brick roof tiles and windows adorned by Capiz shells.  This house-turned-museum displays a wide range collection of antique Chinese jars, glasses, artworks and dinnerware among others.

I had a hard time locating the Jesuit House of 1730, I remember someone pointing me to a warehouse in Old Parian District with a towering gate but I did not enter because it looks locked.  Anyway, this old colonial structure made of coral stone slabs is reputed to be the oldest house in the country.   The Jesuit House of 1730 was the seat of the Jesuit Superior in Cebu. 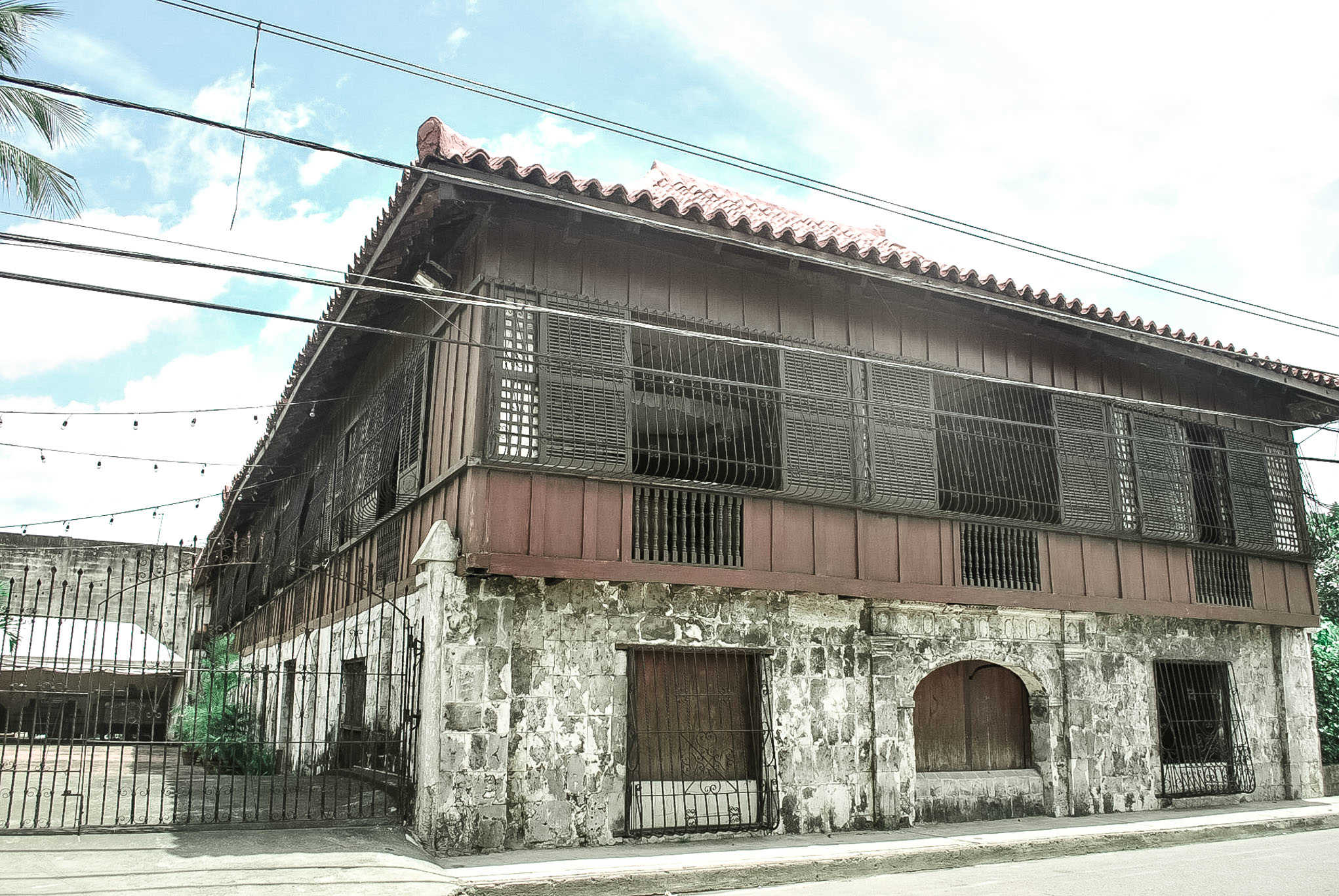 The old house of the late Bishop Juan Gorordo, the first bishop of Cebu is also turned into a museum.  It is like most typical bahay na bato of wealthy families in the Spanish colonial era that is fringed by a well-manicured garden. It houses antique furniture, artworks and heirlooms. Photography is not allowed inside Casa Gorordo Museum.

WHERE TO STAY IN CEBU CITY 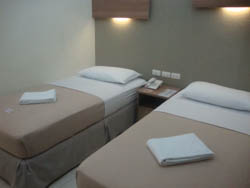 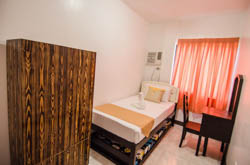 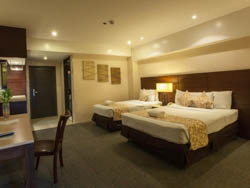 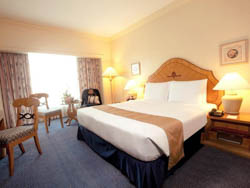 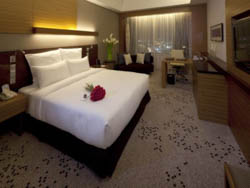 OSLOB SWIMMING WITH THE WHALE SHARKS